“This was both a satisfying resolution and a poignant send-off for Carrie Fisher.” 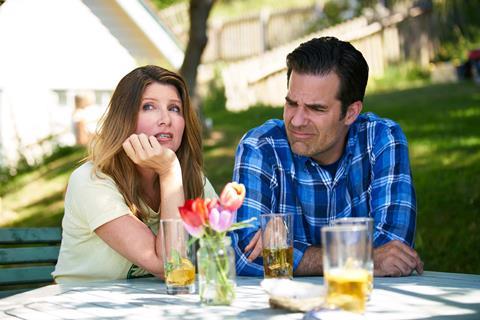 “I don’t know how singletons found it, but for the spoused-up it was like being battered for half an hour in a rough sea and emerging exhilarated at the end. From first to last Catastrophe has been an unremitting triumph.”
Lucy Mangan, The Guardian

“It feels right that the show is ending, but it will be missed. The travails of the American and the Irish-Londoner whose one-night stand led to ‘the full catastrophe’ has been a classic of modern-relationship dysfunction: smart, funny grown-ups paddling against the tide as they’re carried into ever-deeper waters.”
James Jackson, The Times

“This was both a satisfying resolution and a poignant send-off for Carrie Fisher. Catastrophe has been anything but a catastrophe. Indeed, in the sitcom canon, it stands as something of a 21st century classic.”
Michael Hogan, The Telegraph

“This was a creepily noir tale that collected all the best components of Scandinavian crime thrillers — people-trafficking, drug-smuggling, prostitution, vice of all kinds — without ever feeling rushed.”
Christopher Stevens, Daily Mail

“Shetland will just run and run. That’s because the personal lives of Detective Inspector Jimmy Perez and his sharp-eyed sidekick Tosh are largely secondary to the routine TV business of solving murders in a striking location.”
James Jackson, The Times

“As soon as we spotted that new host Joe Lycett was wearing the same sky-blue nail varnish as judge Esme Young, it was obvious the show was getting cheekier. Even if you know nothing about clothes, this show is worth watching just for the quips.”
Christopher Stevens, Daily Mail