“There’s little sentimentality here, only no-nonsense dedication to achieving what many would deem to be impossible” 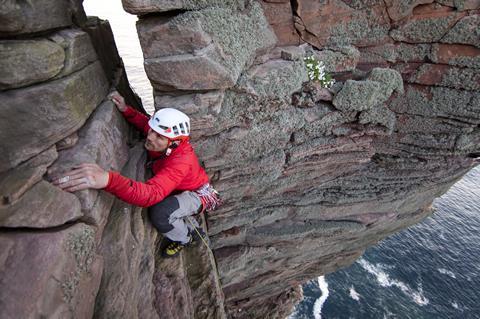 “This tells the story of Jesse Dufton, a climber with a degenerative eye condition that has left him with almost no sight. This is a film made by, and largely for, climbing enthusiasts, though it does the casual non-climbing viewer the courtesy of explaining everything that needs to be explained. Director Alastair Lee has made plenty of climbing films before and his wealth of experience shows. He is present in the story, because he has to be – to film a climb means being on the climb. This is a story of triumph. There’s little sentimentality here, only no-nonsense dedication to achieving what many would deem to be impossible.”
Rebecca Nicholson, The Guardian

“Dufton looked, from the air, like a tiny, man-lizard suspended over the crashing sea. The non-climber learnt a lot here, about holds, cams, belays, underclings, but most of all the sense of exhilaration climbers feel, risking their lives for hours on end, up close and personal with vomiting seagulls. Alastair Lee’s visually gorgeous film was not just about a blind man “trad climbing”. It was also about the love between Dufton and his now wife Molly Thompson, who, as his loyal sight guide, talked him through every move. It was one of the most romantic things I have ever seen.”
Carol Midgley, The Times

“This documentary wasn’t as spectacular as the feat itself and director Alastair Lee was too keen to insert himself into proceedings. He didn’t probe Dufton’s motivations as much as he might. The slang of the climbers interviewed – everything was “awesome” or “epic”, everyone was “dude” or “buddy” – began to grate over the course of an hour. The closing captions informed us that not only had Dufton’s achievement been recognised in the Scottish Parliament, but he and Molly had since married. Call me soppy but my smile broadened at the latter news.”
Michael Hogan, The Telegraph

“Climbing Blind was an agreeable film. Sensibly, the film-maker Alastair Lee also documented a professional climber attempting to scale a piddling little boulder while blindfolded. “That’s ridiculous,” was the verdict.”
Rupert Hawksley, The i

“The glib title, hinting at a gimmicky documentary, did this a disservice. Narrated by Imelda Staunton, this emotive film – shot video-diary style or through subjects’ windows – was a sobering reminder how many people will be affected by the pandemic for a long time to come. Gaining such intimate insights into people’s lives, especially in the current crisis, felt a rare privilege. We watched grandparents sing lullabies via Skype and cancer patients attend appointments alone, missing the support of their families. As well as poignant, it was oddly uplifting – full of indomitable spirit, warmth and flashes of wry humour.”
Michael Hogan, The Telegraph

“This was an eloquent, quietly confident documentary that gave the elderly, so often forgotten, a chance to speak for themselves. The director, Angie Mason, focused on just a handful of stories, which allowed time to acknowledge the mundane. Mason didn’t try to nudge us towards any conclusion. This was not a call for elderly people to be given more freedom. Instead, Old, Alone and Stuck at Home simply forced us to confront an aspect of this crisis that won’t make the headlines.”
Rupert Hawksley, The i

“The documentary didn’t have time to question the basic rationale of the lockdown and whether keeping vulnerable people cooped up without fresh air or sunlight is the right way to prevent a virus from incubating. One GP, Dr Sarah Jarvis, did touch on the untold damage to mental health that emergency measures could inflict. Mostly, however, this was a straightforward protest film — polite, quietly spoken, almost apologetic, but determined to be heard.”
Christopher Stevens, Daily Mail

“Four weeks in and Absolutely India: Mancs in Mumbai finally got to the meat of the matter, namely Dougie Thomas’s desertion of his three sons for six years when they were children. The brothers told him how much he had hurt them, that he never said sorry and always made a joke of things. Dougie looked rueful but appeared to be empathy deficient. He did not apologise and said that he stayed away for so long because: “I just wasn’t strong enough.” What struck me was the emotional literacy of Ryan, Adam and Scott Thomas compared with his lack of it. This series is about India, but also the capacity of children to forgive.”
Carol Midgley, The Times