Code 404; The Sandman; Arsenal: All or Nothing

“The premise is great, a comedy skit on RoboCop, and it’s got a cracking cast” 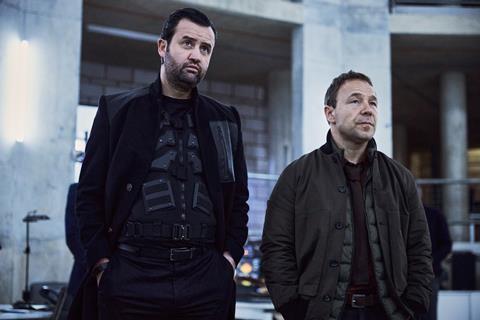 “The premise is also great, a comedy skit on RoboCop, and it’s got a cracking cast, with Stephen Graham as DI Roy Carver, the exasperated straight man and best friend of John, who died on duty and was resurrected using AI, but is stupid and annoying…But although Mays, a great actor, heroically wrestled with an increasingly daft and irritating trope about being able to name all the tracks on Now compilation albums and believing the serial killer was Craig David or someone killing on the theme of the Mr Men books, it simply felt like it was trying too hard.”
Carol Midgley, The Times

“There is solid comedic support from Rosie Cavaliero as the police chief and Michelle Greenidge as a no-nonsense colleague. If only the storylines were better, this could be a really good series. But the writers seem so enamoured by their star double-act that they’ve taken their eye off the rest of it.”
Anita Singh, The Telegraph

“With jokes as silly as that, Code 404 ought to be on at teatime. But almost every sentence would have to be bleeped, to make it fit for family viewing. Good comedy that appeals equally to adults and children is rare. BBC1’s Ghosts is one of the few sitcoms currently doing it well. The endless foul language in Code 404 makes it unsuitable for the audience who ought to enjoy it most — the under-tens.”
Christopher Stevens, Daily Mail

“Each person’s feelings are teased to the surface, and it is horrible and mesmerising and thrilling, with an uncanny, Twin Peaks-ish feel. This is surely a contender for best episode of the year, of any TV drama, and the point at which The Sandman really finds its feet. Yet it is engrossing from the start. It is transportive, playful at times, and certainly grand. But above all, it is dark. Bodies explode, limbs are severed, and demons crawl out of the mouths of professional footballers, fist-first. Nestled in among its more grotesque spectacles, though, is an emotional depth that elevates this far beyond the usual “let’s see what we can blow the CGI budget on” fantasy fodder.”

“The 10-part series bites off a lot, taking in the first two of the collected Gaiman graphics novels. But it moves quickly, the episodic nature of the books well-suited to television. Only at the very end does it fall apart, when Gaiman and his co-writers are required to gobble together a conventional season finale which feels forced. Until then it’s a gripping goth romp – one that at moments feel like The Avengers for Sisters of Mercy fans. Morpheus is one of the Endless, a family of inter-dimensional beings serving as midwives to the human experience”

Arsenal: All or Nothing, Amazon Prime Video

“They include Bukayo Saka, who comes across as a sweet kid both in interviews and when he’s seen chatting to teammates in the canteen, where he enthuses about the rollercoasters at Thorpe Park and laments that he can no longer shop for a Waitrose meal deal without being mobbed. But bad boy captain Pierre-Emerick Aubameyang is not allowed anywhere near the cameras (at least in the three episodes available to review), which merely film him from afar as he arrives at training in his gold-wrapped Lamborghini or sits aloof in the dressing room wearing giant headphones. No-one is asked any searching questions. Instead we have to listen to Arsenal director Josh Kroenke smoothly talking about the club as just another asset in a billionaire’s portfolio.”
Anita Singh, The Telegraph