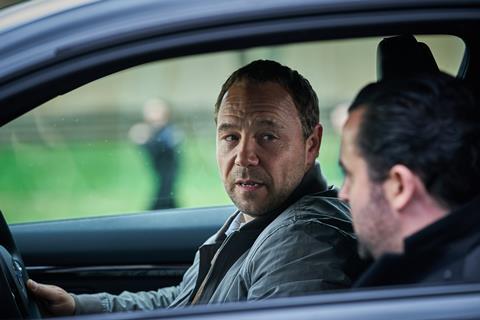 “This is an original comedy from Sky and possibly their best one, thanks to the cast. The joy is that in another universe this could have been a po-faced drama. The action frequently descends into slapstick – Major reacting to the sight of some cocaine at a drug dealer’s house by hoovering up the lot, turning into a gibbering wreck and accidentally getting his partner run over. It’s daft fun and half an hour whips by.”
Anita Singh, The Telegraph

“It isn’t quite as good as its stellar cast promises it should be partly because, brilliant though Stephen Graham is, I’m not sure he is a natural comedy actor. Mays provided almost all of the laughs and the energy in the first episode, although the others, including Anna Maxwell Martin as his indifferent wife, annoyed that he has risen from the dead a year on and that his faked funeral had a springer spaniel in the coffin, come into their own later. It’s the daft sort of content required right now.”
Carol Midgley, The Times

“About halfway through the first episode of Code 404, something strange happened. It became almost unbearably bad. I say strange because up until this hazily defined point – perhaps it was the scene involving a big suitcase and a small locker – it had been a revelation. It was silly and generous, with a funky conceit and some excellent jokes. And then all of a sudden, it tipped over into irritating farce. You know when a pal has one too many beers and becomes a bit of a pillock? Well anyway… it was kind of like that.”
Rupert Hawksley, The i

“Was ITV sending a bunch of lairy Northerners out on the lash? Thankfully not. It was a sweet mix of travel show and family bonding session, as the Thomas brothers went in search of their roots. The show breezed by on the strength of the brothers’ openness and easy charm. This was the first of a series, and future episodes will delve deeper into how the boys were affected by their father’s abandonment. It’s a tricky combination to get right, cheery travelogue and family soul-searching, but it works surprisingly well.”
Anita Singh, The Telegraph

“Sending celebrities on free holidays and calling it a documentary is all that television lives for these days. The Thomas brothers took their father, Dougie, with them. And here, fair play, it got slightly more interesting. Dougie, we learnt, had walked out on them when Ryan, the eldest, was 11 and didn’t return until he was 16. And although my instinct was to think, “Guys, ever considered doing this private family stuff off-camera?”, I imagine this tension will prove to be the spine of the series. The signs are that it will improve, but last night was merely the stage-setter for a marathon version of Who Do You Think You Are?”
Carol Midgley, The Times

“It was obvious as soon as it happened. This was the moment the celebrity travelogue hit rock bottom. Ryan, Adam and Scott Thomas stood in front of a room of school children in Mumbai and tried to teach them some Manchester slang: “It’s sick, that.” Not every travelogue has to be high-minded, or even particularly informative, but I don’t think it’s unreasonable to expect the presenters to show some curiosity. And if they can’t even manage that, just some respect would do.”
Rupert Hawksley, The i

“This mostly consists of the brothers leaning out of taxis in the city’s rush hour streets and screaming each other’s names. ‘Scott!’ yells Adam, before having hysterics. ‘Ryan!’ shrieks Scott, as the hilarity of the moment overwhelms him. When the three brothers have exhausted this fine intellectual pursuit, they head to the street vendors and demand the hottest, spiciest food available. One cook obliges with a sauce-filled chapati that is literally on fire. ‘Adam!’ gasps Ryan, flames belching from his mouth. ‘Scott!’ chokes Adam with smoke drifting from his ears.”
Christopher Stevens, Daily Mail

“This second series of writer Sophie Petzal’s suspenseful family mystery is even more baroque than the first. If you like your crime serials on the brink of wild-eyed madness, with skeletons crammed in every cupboard, Blood is bliss… all set to a haunting piano soundtrack by Ray Harman. The dual timeline was hard to decode in the first episode, but by halfway through the week (Blood ends on Friday with a double bill) everything is clearer.”
Christopher Stevens, Daily Mail

“This is HBO’s six-part series about a group of female skateboarders. Betty advances stories that are gripping in their believable un-sensationalism – a kaleidoscope of experiences for young women in New York that doesn’t feel too overtly “girl power”. Janay grapples with a disturbing revelation about her best friend and YouTube show partner, a #MeToo storyline that Betty handles delicately without resorting to emotional gimmicks. The series features beautifully propulsive sequences of skateboarding across New York, but shines brightest in its most stripped-down, documentary-adjacent moments of mundane girl talk.”
Adrian Horton, The Guardian