“Whether you will last the course naturally depends on your appetite for earnest and extremely slow drama, but this carries an addictive pull for those happy to hop aboard” 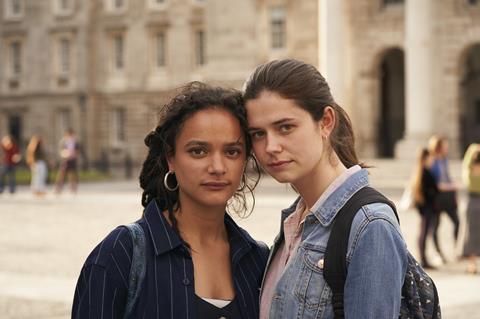 “Frances and Bobbi’s starburst into an exciting and grown-up world of snazzy kitchens and decent wine contrasts beautifully with their drudgy flats, cricked necks from sofa sleeps and endless bus and train journeys. Whether you will last the course naturally depends on your appetite for earnest and extremely slow drama, but this carries an addictive pull for those happy to hop aboard. It has the confidence of a production team coming off the back of a hit and in no hurry to change a winning formula.”
Ben Dowell, The Times

“As with Normal People, there are plenty of sex scenes, tenderly shot by the same director, Lenny Abrahamson. But there is no spark between the two leads, meaning no explanation as to their mutual attraction, apart from the fact they’re as awkward as each other. Thank goodness for Jemima Kirke as Melissa and for Sasha Lane as Bobbi, Francis’s best friend and former girlfriend – their characters are extroverts and easy conversationalists, both of which are sorely needed to pep things up.”
Anita Singh, The Telegraph

“I like a mood piece as much as the next person, but to stretch one out across a dozen episodes is to test the boundaries of even the most willing soul. Instead of a wealth of detail – albeit ironised by characters trying to shield themselves from harm or true feelings as the web of secrets grows – we get lots of meaningful looks, covert glances or charged/pained/strained silences, and very little in between to guide us. When everything is evoked, nothing is.”
Lucy Mangan, The Guardian

“Where Normal People ran consistently hot, Conversations with Friends struggles to warm itself up. With long stretches in which very little happens, the overly long 12-episode run dilutes the intensity of relationships that end up feeling inconsequential. Where the novel pulsated with life and ideas, this feels fleeting – its languid and meandering pace encourages you to let the story wash over you, but it also threatens to be washed away all too quickly in pop-culture consciousness.”
Rachel Sigee, The i

“Host Ellie Taylor is deadpan when necessary, the programme has enough self-awareness to recognise its own trashiness, and there are moments when the absurdity is amusing. The problem is that once you get past the gimmick, this is just the familiar format of three dates followed by a winner, and I don’t think I’ve seen a single dating show like it where it hasn’t been obvious who will be chosen from the second they meet.”
Rebecca Nicholson, The Guardian

“Let’s Make a Love Scene is the most ill-conceived programme idea since Prince Edward dreamt up It’s a Royal Knockout. The concept is awful, and the execution is worse. Every moment had me cringing to my boots, from the scenes themselves to the point afterwards at which Taylor watched them back, popcorn in hand.”
Anita Singh, The Telegraph

“It’s a heady gambol through a convincingly realised Tokyo, and Ansel Elgort is comfortable as the protagonist, mixing the raw verve he showed in West Side Story with the quiet capability of his character in Baby Driver. For a show that’s meant to be a journey into the criminal underbelly of a darkly thrumming metropolis, Tokyo Vice maintains a surprising innocence, staying cute and soft, like Elgort’s baby face. It doesn’t know quite what it’s doing.”
Jack Seale, The Guardian

“In recent years, British audiences have had access to brilliant foreign crime dramas. Watching a show in which the maverick Westerner is the only character with the gumption to challenge the rules and crack the case seems like a throwback. The Japanese reporters are subservient corporate drones, while the Japanese detective who offers to show Adelstein the ropes is an old-school sleazeball. It all feels as dated as Miami Vice’s fashion sense.”
Anita Singh, The TelegraphC