Cooking with the Stars; My Floating Home; Heist

“Overall this was exciting, charming and fun with accomplished editing helping to strain every drop of tension” 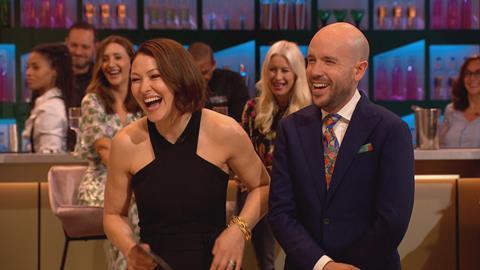 Cooking with the Stars, ITV

“This enjoyable serving of meal-prep melodrama contained lots of familiar ingredients as eight chatty celebrities, of varying levels of culinary expertise, were challenged to prove their skills in the kitchen. Presenters Emma Willis and Tom Allen struck the right note of matey irreverence, and there was little danger of the viewer being overcome with envy as the celebs, endearingly hopeless at the hob, rolled up their sleeves. There was none of the cruelty or emotional manipulation too often a feature of reality TV. And when Naughty Boy was voted off he didn’t pretend it was the end of the world. Cooking With the Stars was all the tastier for this lack of artery-clogging razzmatazz.”
Ed Power, The i

“I know ITV was showing something else on Sunday, but it was still strange to see a show like this on a weeknight. The channel executives might be hoping it beds in before giving it a more illustrious slot and were probably also worried at how cack-handed the whole thing might become given how rubbish the competitors all promised to be. Overall this was exciting, charming and fun with accomplished editing helping to strain every drop of tension. I’ll certainly be coming back for seconds next week.”
Ben Dowell, The Times

“As the final challenge of the opening show, two hapless cooks were handed eggs, a whisk, some slabs of ice cream and a pocket flame-thrower — and given 45 minutes to bake their Alaskas. Catastrophe is the whole point of this boisterous, entertaining format.”
Christopher Stevens, Daily Mail

“The homes in this enjoyably off-beat series sometimes seem like glimpses of the future, sea-going portents of how we’ll all be living if the oceans rise too high. But I suspect concert venues in canals will always be a rarity.”
Christopher Stevens, Daily Mail

“There was a simple pleasure to be had watching Tayama and Henderson nurse their project from humble origins. And it was hard not to feel buoyed as their canal dreams became a water-borne reality.”
Ed Power, The i

“Heist is a wildly entertaining collection of true-crime stories that falls firmly into ‘you couldn’t make it up’ territory. Heist is cleverly told, keeping its many twists and turns in reserve until the moments when they will have the most impact, and it is a lot of fun.”
Rebecca Nicholson, The Guardian