“This is electrifying television (to me, anyway), from the non-verbal communication to the slow unspooling of ordinary human lives” 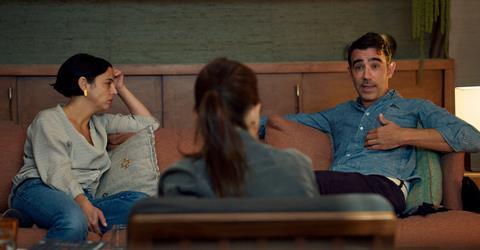 “Feel free to call me a mouth-breathing, net curtain-twitching voyeur but, ooh, Couples Therapy could get addictive. Others may disagree, and I suspect they are mainly men, but this is like earwigging on another couple’s row in a restaurant, except you don’t need to strain or pretend to drop a fork. In some ways it’s a fishwife’s paradise, yet it is never salacious or gleeful about the emotional laundry on display. We are not in Jeremy Kyle territory; the mood is sensitive, not prurient. This is electrifying television (to me, anyway), from the non-verbal communication to the slow unspooling of ordinary human lives.”
Carol Midgley, The Times

“It is so beautifully lit, and tastefully filmed, that you could at first mistake it for a drama. But no, these are real people discussing their real problems. It feels both intensely voyeuristic and also put together so thoughtfully that you don’t dislike yourself for watching it. And it’s not as if the participants don’t know what they’re signing up for – zero patient confidentiality is part of the deal. The skill is in the editing, because each couple’s story is distilled into a few minutes of each episode and made riveting.”
Anita Singh, The Telegraph

“How disappointing that this long-awaited second season has decided to lean into its crueller instincts. Euphoria is unrelentingly explicit this time around, as if it took one look at its former self and thought: no, not shocking enough, try this. There is so much nudity, so much sex and so much violence; its characters batter each other senseless, mentally and physically, and the camera lingers on each and every mark. It all feels like a trap. Point out that the violence and nudity are too much and you risk coming across as a prude. But the truth is that Euphoria was always more than this. Relying on provocation for the sake of it suggests a crisis of confidence.”
Rebecca Nicholson, The Guardian

“Euphoria’s problem continues to be that its visual punch isn’t matched by any emotional truth. Once again, its ‘teenagers’ – a collection of actors in their twenties led by Zendaya’s Rue – never came close to capturing the complicated reality of adolescence. They conducted themselves like world-weary 40-year-olds trapped in the bodies of 18-year-olds. It was hard not to conclude that Euphoria’s 37-year-old showrunner, Sam Levinson, was projecting his own fantasies about what it is to be young in 2021.”
Ed Power, The i

“Each Levinson release ignites the debate of style versus substance. To the delight of some – and the dismay of others – the director has made moody lighting, needle drops and hyperkinetic camera movement his cachet. If Euphoria’s second season is anything to go by, the director seems unperturbed by his critics. Levinson’s lens is as agile as ever. It pushes and pulls, staggering left and right. In small doses, it is intoxicating – the visuals crest and crest while the subject matter pulls further and further down – but now on its second season, the edge has dulled. Instead, it can all feel a bit nauseating.”
Annabel Nugent, The i