Crime; Grand Designs: House of the Year; Al Murray: Why Do the Brits Win Every War?

“Each episode crackles with unpredictability and energy” 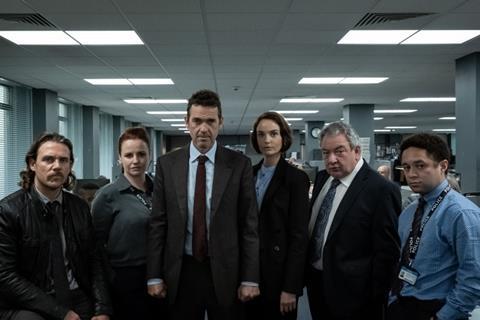 “On paper, it’s a standard police procedural – missing girl, list of suspects, experienced investigator thrown together with rookie sidekick – of the kind you find everywhere. But what lifts it above the ordinary is an incendiary performance from Dougray Scott…Scott delivers every line with a burning intensity yet manages at the same time to convey the character’s emotional fragility, and the toll that his job is taking…With co-writer Dean Cavanagh, Welsh has loosely adapted his 2008 novel. Each episode crackles with unpredictability and energy. It takes you to places that you don’t expect. Sometimes you’re not quite sure if you’re watching Lennox’s real actions or you’re inside his head…It’s superior stuff, but with one reservation. Here we have yet another drama falling back on the rape, torture and murder of young women as fodder for a plot, the camera lingering on the ligature marks on a corpse and characters – including a pathologist – discussing the details in larky tones. That’s not “hardcore”. It’s depressing.”
Anita Singh, The Telegraph

“Crime is exactly what you’d expect, and want, from a police procedural written by Welsh and set in Edinburgh. There’s not a sporran, set of bagpipes or a twee tea room in sight, and the city is portrayed as an unrelentingly drab, dingy, depressing sort of place where the sun doesn’t even shine out of the star detective’s arse and no one’s got a degree…While it’s very Welshy in its mood and its settings, Crime itself is more standard-issue TV-police-procedural-by-numbers.”
Sean O’Grady, The Independent

“The word “house” has complicated associations, and on the basis of this competition, is not to be confused with “home”. It is not clear whether the winning project here will be commended for its architectural wizardry, or for its ability to improve its owners’ lives and inspire future, better iterations of the sorts of houses the rest of us occupy. I fear it will be the former. UK housing is in short supply, and is too often badly constructed, a health risk or made from deadly materials. There are scores of problems worth architects’ time; I’m not sure House of the Year tackled any of them.
Barbara Speed, The i

“The problem with Grand Designs: House of the Year (Channel 4) is that it misses out the most compelling bits of Grand Designs. The disasters, the hubris, the mystery of how they can go wildly over-budget without it ever seeming to matter in the end, the faraway look in the wife’s eyes that says she’d actually be quite happy living in a Victorian terrace with normal-sized windows. Instead, House of the Year presents us with the longlist for the Royal Institute of British Architects’ annual contest. We get the finished projects but none of the drama, just Kevin McCloud throwing out superlatives. A schadenfreude-free Grand Designs? Pah, where’s the fun in that? It is enjoyable to have a nosey around these places, though, to see how other people live.
Anita Singh, The Telegraph

Al Murray: Why Do the Brits Win Every War?, Sky History

“The history is interesting enough that we probably didn’t need cries of “they sound like sex-crazed hippies in fancy dress!” or Brexit-tinged jokes about immigration –“the occupational hazard of living in the best country in the world is that everyone wants to come here!” – to keep us engaged. Then again, it was refreshing seeing a laddish take on an academic topic – I’m sure Murray reeled in some of his fanbase who might not give a toss about the Vikings otherwise.”
Barbara Speed, The i