“The scripts are sharp, with one-liners that can make me laugh out loud” 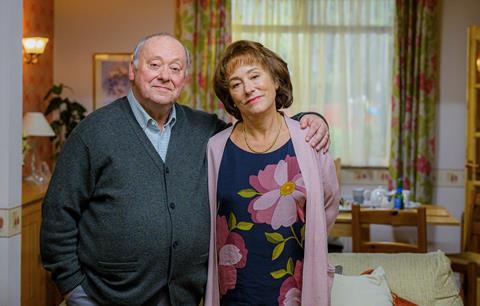 “Two Doors Down’s method is to lure you in with the homespun, old-sitcom, multi-camera set-up and then slap you round the chops with sudden bursts of ribaldry. There’s effing and jeffing where you least expect it, a sturdy reliance on poo jokes and a lot of saying the unsayable (where the unsayable might actually be best left unsaid.) What saves Two Doors Down from the realms of utter dreck is the performances, which are the definition of making the best of a bad situation. Arabella Weir, in particular, fashions a believable character out of half an hour of mildly-miffed reaction shots.”
Benji Wilson, The Telegraph

“The scripts are sharp, with one-liners that can make me laugh out loud. And the comedy is broad, all exaggerated reactions and painful embarrassment. Above all, it’s inventive. Though the basic set-up rarely changes, with everyone barging in uninvited, writers Simon Carlyle and Gregor Sharp never repeat the same situation. In more than two dozen episodes, there’s always something different happening — a barbecue, a wake, a visit from relatives.”
Christopher Stevens, Daily Mail

“Two Doors Down is a classier act. Here you are laughing at the fact we all know someone who would make exactly that joke (actually it might be me), although the elderly person who insists on giving you every detail of their colon’s health is a well-trodden path. This wasn’t the funniest episode that I’ve seen, but the writing is always tight and sharp.”
Carol Midgley, The Times

“Ragdoll is, as you’ll have gathered, laughably over-the-top but it’s also genuinely funny. By far the best part of it is Rose’s relationship with Baxter. They tell bad jokes, do karaoke and they’re both pleasingly rude to their American underling (Lucy Hale) for no obvious reason.”
Benji Wilson, The Telegraph

Is Ragdoll a masterpiece? Not quite, not yet. Some of the scenes are too stylised, and Phil Davis has a confusing guest role as the mayor of London, who looks like a Boris Johnson-ish clown and acts like a gangster, but also seems to be a leftwing stalwart; he is overegged, something the show flirts with throughout. If it does crash and burn, those of us who are on its wavelength will happily go down with it.”
Jack Seale, The Guardian

The manic crime thriller Ragdoll (Alibi) veers all over the place but has no time for melancholy, as wisecracking London detectives hunt a serial killer with a ghoulish trademark…The gags are almost as brutal as the murders.”
Christopher Stevens, Daily Mail

“it’s hard to believe that the dialogue could be funny with this elephant in the room but it is, and this is the best thing about Ragdoll. The plot is silly…However, it is saved by deadpan funny, charismatic performances from Lloyd-Hughes and Thalissa Teixeira as his boss, DI Emily Baxter, along with their young sidekick, a worthy, earnest American DC, Lake Edmunds (Lucy Hale). It is urban noir with laughs. At a time when cop shows are ten a penny this at least feels fresh and different and doesn’t take itself too seriously, despite the gore and horror.”
Carol Midgley, The Times