“It was easy to skip past the holes in the premise because the put-downs fizzed and the pace didn’t let up.” 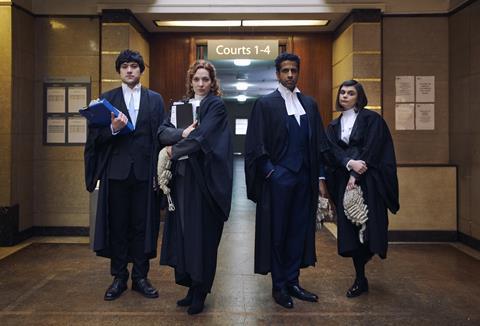 “I won’t pretend to have ruptured any ribs watching Defending the Guilty, but I did snort a lot. The premise — four young barristers scrapping for one place at a London chambers with nasty criminals the backdrop — is a fecund platform for skewering not only the absurdity of the human condition, but the frequently unglam job of being a learned friend. It promises to be Silk with dirty jokes.”
Carol Midgley, The Times

“It was easy to skip past the holes in the premise because the put-downs fizzed and the pace didn’t let up. Writer Kieron Quirke managed a mosaic of plot lines, set up both rancour and some affection between the barristers and the pupils, and put it all to bed in a crisp 30 minutes.”
Benji Wilson, The Telegraph

“It’s not perfect – the writer could have been more judicious with the sheer number of colourful references included in the script, which while often clever, lose their impact in the onslaught. Nor is it laugh-out-loud funny, exactly. But it is entertaining, and Will Sharpe’s portrayal of a young man tussling with his morals, self-esteem and ambition make this a comedy with real heart.”
Sarah Carson, The i

“In this first episode of the new series it felt more comfortable in its skin. The humour seemed less forced and, with the characters bedded in, easier to watch. It is still the same formula, but there is a place in life for clean, old-fashioned comfort comedy.”
Carol Midgley, The Times

“Bad Move is disappointingly lacking in wit or imagination. The performances from Jack Dee and Kerry Godliman are fine, and Miles Jupp hams it up satisfyingly as their smug neighbour Matt, with his runner beans and crab-apple jelly. But the material is just too gentle.”
Sarah Carson, The i

“Bad Move is indeed quite bad but mostly it’s just confusing: how did the same writing team who wrote Lead Balloon, a wry, eccentric tale of failure and mid-life frustration, come to pen something so lightweight and predictable?”
Benji Wilson, The Telegraph

“Written by and starring Jack Dee, the first series of Bad Move was a ratings winner even though the action was a little contrived. This time the comedy is subtler yet brilliantly mocking of those smug Londoners who dream of cashing in for a country idyll only to hate every minute of it.”
Claudia Connell, Daily Mail

“A classic episode, involving some minor peril, passive-aggressive building contractors, escalating costs, birth, death and some ingenious stonework. It’s not up there with the one about the derelict water tower, but I’ll probably watch it three times over the next decade.”
Chitra Ramaswamy, The Guardian

“Even after 18 years Grand Designs hasn’t lost any of its appeal. Seeing how the other half live and feeling exasperated at their first-world problems is one of the joys of the programme. But what really makes it is the understated presenting of Kevin McCloud, who’s seen it all before and doesn’t try to hide his irritation at the participants’ unrealistic plans.”
Claudia Connell, Daily Mail