DeLorean: Back from the Future; Secrets of Your Supermarket Food; 50M²

“This was a riveting, brilliantly crafted tale of ambition, greed, fraud and flabbergasting porkies” 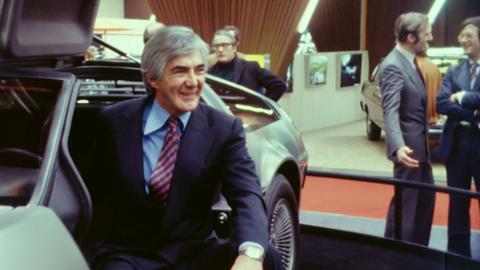 DeLorean: Back from the Future, BBC2

“This documentary was 100 minutes long, which was about 20 too many. You would have to be very interested in DeLorean to hang on every word of this documentary. However, it was beautifully structured, with a time frame that jumped back and forth between his early life and his heyday, although the thumping-heartbeat calendar counting the years like a horror film was a bit much.”
Carol Midgley, The Times

“DeLorean: Back From the Future was an engrossing account of DeLorean’s rise and fall, featuring interviews with everyone that mattered. The man himself died in 2005 but the film made good use of archive material.”
Anita Singh, The Telegraph

“This was a riveting, brilliantly crafted tale of ambition, greed, fraud and flabbergasting porkies. A fascinating account that wisely focused not only on DeLorean but also on those he let down.”
Gwendolyn Smith, The i

“The documentary examined DeLorean from every angle, hopping back and forth through his life to strip away the charm and the lies. Thanks to the Michael J. Fox trilogy of Back To The Future movies, the car now symbolises time travel. The film-makers could have traded on that cheesily, but chose to keep it simple instead. Sensibly, this film also steered away from the wilder conspiracy legends that have grown up around the man.”
Christopher Stevens, Daily Mail

Secrets of Your Supermarket Food, Channel 5

“This is one of the better consumer programmes on TV, treating its audience as intelligent people trying to shop well, rather than one hooked on Turkey Twizzlers.”
Anita Singh, The Telegraph

“It is predictable and cliched stuff, but enjoyably so, because Shadow is good company. He is the kind of slightly out-of-shape action antihero who doesn’t always acquit himself with perfect panache in a fight, but usually has a nicely self-deprecating quip to smooth over the slip-up.”
Rebecca Nicholson, The Guardian