“Beautifully observed, it illustrated how the best TV can be about nothing at all.” 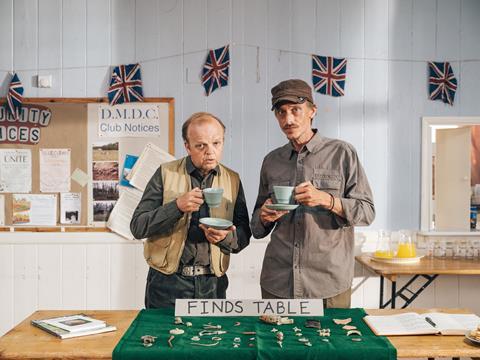 “This was a note-perfect, wistful and warm-hearted portrayal of male friendship. It’s almost compulsory in Detectorists reviews to say the show unearthed comic gold. Indeed it did.”
Michael Hogan, The Telegraph

“Beautifully observed, it illustrated how the best TV can be about nothing at all. In less talented actors’ hands it might be dull. In theirs it’s a gentle tour de force.”
Carol Midgley, The Times

“You might not be literally rolling on the floor laughing, but it’s beautifully written and performed – sparse, droll, understated and believable.”
Sam Wollaston, The Guardian

“Much of the joy in this unique show lies in the quiet friendship between the men. It isn’t the back-slapping, ego-boosting act enjoyed by alpha males: they are just two shy, vulnerable souls who trust each other not to make hurtful jibes … at least not on purpose.”
Christopher Stevens, Daily Mail

“While hapless man children have been the lifeblood of comedy since Laurel and Hardy, Crook’s take on this dynamic has been one of the most understated yet, and all the better for it. Long live the death of masculinity if it produces melancholy comedy this tenderly funny.”
Bernadette McNulty, The i

“It would be easy to make a comedy that mocked men and their little hobbies. This turns an obsession into TV treasure.”
Matt Baylis, Daily Express

The Truth About Slim People, Channel 4

”This was a clever TV idea because we all know people who seem to eat crap all day yet remain Twiglet thin. What spoilt things, however, was that, as so often in documentaries, we were addressed as if we were five years old.”
Carol Midgley, The Times

“It was easy to hope for some big revelations from this televised experiment. Alas no, the close surveillance of Yemi and Anne-Marie just revealed that they led far healthier lives than they seemed to.”
Matt Baylis, Daily Express

“This show has many of the right elements: an eerie theme tune and a highly improbable plot, about a businessman who returns to his hometown where he is suspected of murder. But it’s painfully stilted. The characters seem to pause and read each line off prompt cards.”
Christopher Stevens, Daily Mail