Don’t Rock the Boat; CripTales; Deliveroo: Secrets of Your Takeaway

“A surprisingly enjoyable entry to the reality TV genre” 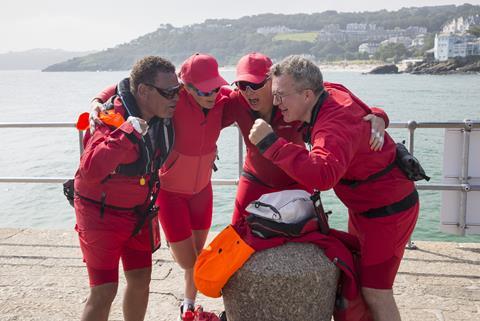 “Don’t Rock the Boat is a surprisingly enjoyable entry to the reality TV genre, even if it does scream of a title being decided and a concept being invented to fit it. If you find the prospect of toilet chat a bit too much, then be warned. If you are made of sterner stuff, then it is an entertaining blend of endurance, nice scenery and seemingly decent people pulling together to get to where they need to be.”
Rebecca Nicholson, The Guardian

“Rowing the length of Britain (500 miles) by day and night is, for once, a proper ‘challenge’. The problem is that televisually it’s a bit samey watching two teams in a rowing boat for an hour. Plus these kind of shows are so very common now. However, it features Denise Lewis, Victoria Pendleton and Shaun Wallace from The Chase, so at least we are assured some eye-watering uber-competitiveness and, doubtless, much more barfing as it continues every night this week.”
Carol Midgley, The Times

“The format won’t win any awards for originality. It was essentially Strictly Come Paddling or Britain’s Got Oars. Yet it was engaging enough, thanks to the gruelling nature of the task, the crews’ camaraderie and the chance to watch celebrities in extremis. With the nation soon back under lockdown, it was also a treat to see some stunning coastal scenery. Even if it was accompanied by the queasy sound of spewing.”
Michael Hogan, The Telegraph

“‘Celebrities do a challenge’ is a well-worn format, but something about this felt different. Maybe it was the backdrop of the pandemic, which seemed to have produced more thoughtful answers to the question of why the celebrities took part.”
Barbara Speed, The i

“Watching people rowing is really dull. Everyone is hunched over their oars. They have no spare energy for talking. There’s no scenery. And the sight of Red Dwarf actor Craig Charles chucking up in a bucket loses its appeal quite quickly.”
Christopher Stevens, Daily Mail

“CripTales, a series of short monologues on disability, may not sound like a lot of laughs, but both offerings were terrific, funny and written with sharp economy.”
Carol Midgley, The Times

“Both shorts managed to be sharp, dark and unexpected all at once, and the injustice that these actors, writers and directors have to fight so hard for their place on the screen was stark.”
Barbara Speed, The i

Deliveroo: Secrets of Your Takeaway, Channel 4

“Unfortunately, this documentary seemed without narrative purpose or thesis. At times it felt like a puff piece, keen to sell this global empire as one big happy family. In return for access all areas, filmmakers were reluctant to ask tough questions, skipping over the copious flaws of the gig economy. Ultimately, this frustrating film felt like a disappointing takeaway. It left us hungry for something more substantial.”
Michael Hogan, The Telegraph