“As with almost everything else, Eurovision had been ruined by coronavirus” 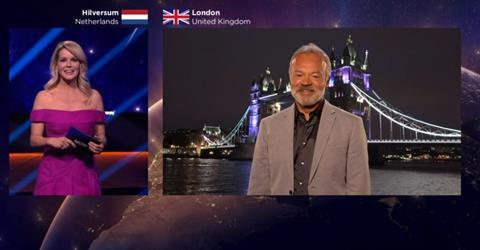 “A lockdown Eurovision was like the world’s least appetising MTV channel in which the producer, afflicted by a strange form of musical ADHD, could only be fagged to give each song 30 seconds airtime. The Euro artists, robbed of their chance to ham it up live on stage, consoled themselves by trotting out endless inspirational fridge-magnet quotes. At times I found the occasion quite moving. Graham Norton was right when he said: “There’s no denying this is a very odd programme, but there’s something moving about television getting its head around a global pandemic.””
Carol Midgley, The Times

“As with almost everything else, Eurovision had been ruined by coronavirus. Gone were the colours and lights of the arena, replaced instead with aerial shots of desolate European cities, complete with sad greyscale filter to hammer home just how bleak things are right now. Eurovision has never been one for subtlety, but there was more nuance when Poland’s 2014 entry Donatan and Cleo were joined on stage by a woman dressed in low-cut milkmaid’s outfit provocatively churning butter.”
Alim Kheraj, The i

“This was a fragmented and frequently cringeworthy attempt to stage a live show across the continent despite the lockdown. The idea was to give us a hint of the songs we wouldn’t be hearing this year — a 30-second clip from each of the 41 semi-finalists and finalists, plus a saccharine message from every one. There’s only so many times I want to be urged to follow my dreams and believe in the power of music, and 41 is too many.”
Christopher Stevens, Daily Mail

“White Lines is a massive amount of fun. The latest creation of Álex Pina, the man behind Money Heist – the streaming platform’s most watched non-English language series – and it gathers momentum with every scene. White Lines has been hyped as the hit of the summer, and even though it will not be the summer any of us were expecting I’d be surprised if this lurid, swirling, fantastically confident creation didn’t hit the spot.
Lucy Mangan, The Guardian

“Set in Ibiza and switching between two timelines – the 90s and the present day – it follows sensible, married Zoe on her journey to try and find out what happened to her older brother. The mystery at the heart of the show plays out well. The greatest mistake here is that the series doesn’t dwell on the thriller element enough. Instead we dip in and out of soap territory, with hammy acting and countless storylines. Each of these strands is interesting enough, but they never quite slot together to create a complete picture.”
Emily Baker, The i

“The thing about BBC Four is that it gives you programmes you never knew you wanted. David Stratton’s Stories of Australian Cinema is a case in point. I had never heard of David Stratton, and never given much thought to Australian cinema. Yet after stumbling across this last of a three-part series, I now know more about both, and feel the richer for it. This was not a flashy new show, or an original commission. But it informed, educated and entertained, and doesn’t that count for something?”
Anita Singh, The Telegraph

“Portillo steered a middle course. When the facts were unassailable, he didn’t try to counter them but when it came to the majority of those who ruled India during the Raj, and their attempts to “civilise” the natives, he attempted to give their actions some context. Portillo deferred to Indian voices throughout, rather than foist his own opinions on us.”
Anita Singh, The Telegraph