“A joyous, cringeworthy, surface-level celebration of being a twentysomething and all the neuroses and panic that comes along with it” 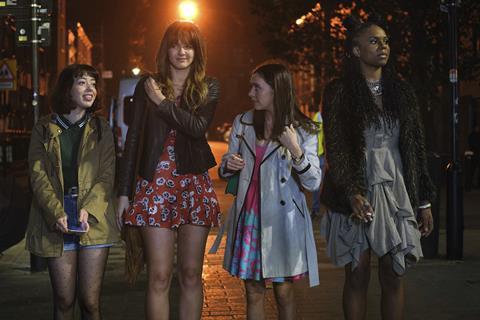 Everything I Know About Love, BBC1

“Everything I Know About Love has been billed as a Sex and the City for our times, but the characterisation isn’t strong enough and it doesn’t have that touchstone’s wit, subtlety or wisdom – or at least distance from the turbulent time depicted that would pass for the latter. But it’s fun to spend time with Maggie and her gang. Exhausting, but fun.”
Lucy Mangan, The Guardian

“Everything I Know About Love isn’t a show to think about too deeply. It’s a joyous, cringeworthy, surface-level celebration of being a twentysomething and all the neuroses and panic that comes along with it. Those hoping for an HBO-level production and worldly introspection won’t find it among the choreographed dance routines and dating app politics.”
Emily Baker, The i

“While the dialogue sometimes skews slightly towards the self-conscious, the show rips along at a jaunty canter, propelled by nostalgia for pop music and the, now quaint-seeming, optimism of that Olympic summer.”
Nick Hilton, The Independent

“What’s that? You’d rather set fire to your own head than watch two months of this vacuous tripe which feels even more fatuous than usual when Ukraine is being flattened? Oh, I hear you, my friend. But look. This year they’ve got a new villa in Majorca. And a bigger swimming pool! Instead of them choosing who to couple up with, the viewers got to decide instead. And what we seemed to learn immediately was that the viewing public wanted black men and black women together and white men and white women together. Perhaps not the start Love Island was hoping for.”
Carol Midgley, The Times

“What could have been a brilliant way to inject some drama from the get-go actually had little to no bearing on the way the rest of the episode played out. While it meant that no-one had to go through the humiliation of being picked last (or worse, left on their own) on national TV, it also meant the process was entirely predictable – I guessed every single couple correctly. Still, it seems the public’s intuition was rather off, as no one seemed particularly happy in their initial couples. It could (and hopefully will) spell chaos.”
Emily Baker, The i

“If two siblings blithely take a test and discover they are not blood relatives, the emotional fall-out could be horrible. Long Lost Family Special: Switched At Birth ran these risks in an episode that left me deeply uncomfortable. When it began in 2011, Long Lost Family brought together people who desperately wanted to be reunited. It has strayed a long way from that mission. Nicky and Davina need to think seriously about the ethics of what they are doing.”
Christopher Stevens, Daily Mail