“A glorious, shining jewel in the middle of what I think we can safely call the greatest global shitstorm since the second world war” 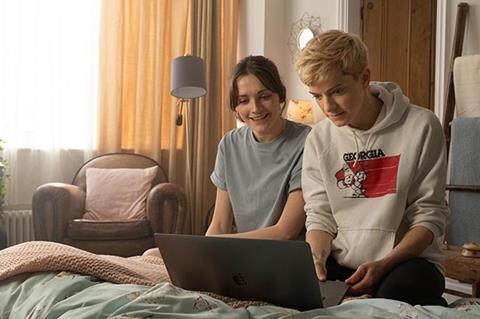 “This is a glorious, shining jewel in the middle of what I think we can safely call the greatest global shitstorm since the second world war. It captures the early days of a romance beautifully, when lust obscures detail and difference, and everything is precisely as thrilling as it is anxiety-making.”
Lucy Mangan, The Guardian

“At heart this was an unabashedly soppy love story, sweetly portraying the early throes of passion. Mae Martin and Charlotte Ritchie had instant chemistry. Co-created by Martin and playwright Joe Hampson, the story was palpably personal and had the ring of authenticity.”
Michael Hogan, The Telegraph

“Some of the writing was a bit self-consciously quirky. Not unfunny, but the ironic tone jarred. I’m looking forward to tagging along to see how Mae and George work things out. Which they surely will – it’s that sort of show.”
Rupert Hawksley, The i

“Some laughs were more strained, as though the lines had been rewritten so often that their originality had worn away. But the love affair is sweetly appealing, and there’s an undercurrent of heartbreak as we begin to realise that both women are hiding pain in their past.”
Christopher Stevens, Daily Mail

“Kate’s spikiness and Koji’s pomposity allowed this intriguing new double act at least the potential to go on and do more than simply luxuriate in a nice warm bath of liberal goodwill. Still. These days we’ll take whatever luxuriating we can get.”
Ben Dowell, The Times

“Last year, ITV boss Kevin Lygo said that the future of sitcoms on his channel was ‘quite bleak’. Here is Kate & Koji to prove him right. It is the year 2020, and they’re giving us a remake of Rising Damp. Despite those references to snowflakes and self-identification, it feels so old-fashioned that even the 1970s might have disowned it.”
Anita Singh, The Telegraph

“Kate & Koji is funny — and funny enough to make me snort with laughter. The script is well-honed by Andy Hamilton and Guy Jenkin, who wrote Outnumbered. But what raises this show far above the ordinary are the performances by Brenda Blethyn and Jimmy Akingbola as the title characters. Blethyn especially is relishing her character, as bigoted as Alf Garnett and as short-tempered as Victor Meldrew.”
Christopher Stevens, Daily Mail

“As an explainer it was fine. A more interesting question might be: why is Cummings like this? Is his behaviour driven by arrogance or insecurity? But there was little attempt at psychology, and no information about his early life.”
Anita Singh, The Telegraph

“Oddly, we got nearly halfway through the hour before we met our first (and only) female talking head, the trade unionist Mary Bousted, who told one of many depressingly familiar stories of studied willy waving. The one thing missing from this was (not surprisingly) Cummings himself. I rather suspect he’d have loved it.”
Ben Dowell, The Times

“The problem with making a documentary about a man who doesn’t give interviews and doesn’t appear to have many friends is obvious: how do you actually reveal anything about him? It is a problem that Taking Control: the Dominic Cummings Story never quite managed to overcome. There was almost nothing here about Boris Johnson’s chief adviser that you wouldn’t have known already if you picked up a newspaper from time to time.”
Rupert Hawksley, The i