“Despite a wobbly start, Frayed shows huge potential and while the jokes are few, they are funny” 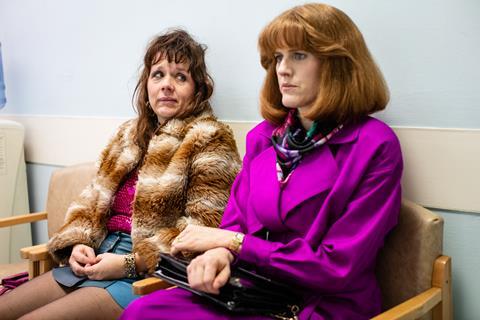 “It’s billed as a comedy but for the opening episode the gags thin out. This leaves a drama leavened by the blackly humorous moments that arise as the fan of life continues to spray what’s recently hit it all over you. Sparks look set to fly, but the first episode was unquestionably a slow burner.”
Lucy Mangan, The Guardian

“Is Frayed supposed to be a comedy, or a comedy-drama? A bit like main character Sammy, Frayed doesn’t quite know what it wants to be. Somewhere among the sibling squalls and pungent punchlines, there’s an almost-touching comedy – or comedy-drama? – about the limits of self-reinvention.”
Jasper Rees, The Telegraph

“Tonight’s first episode promised a good start, with Sammy’s husband dying by asphyxiation in a hotel room with his phone stuck up his bottom. From then on, the pace slowed to almost a halt. Cue half an hour of introductions to new characters, each of whom have a history with Sammy. Despite a wobbly start, Frayed shows huge potential and while the jokes are few, they are funny.”
Emily Baker, The i

“Victoria James’s excellent film painted a detailed picture of a conspiracy metastasising in the Fake News era. She interviewed people from all sides of the debate, from concerned scientists and government officials to parents and leaders of movements who allege links between childhood vaccinations and traumatic conditions such as autism.”
Gabriel Tate, The Telegraph

“The freshest part of this meticulous documentary was the link between anti-vaxxers and modern populist politics of the Trump era — the seizing of simple messages, untroubled by facts, to pander to a certain crowd. I didn’t count, but there seemed to be slightly more airtime given to the anti-vaxxers than to the experts; I suppose emotion-led protestors make better TV than science-led medics.”
Carol Midgely, The Times

Inside Prison: Britain Behind Bars, ITV

“Did anyone else have a vague feeling during Inside Prison: Britain Behind Bars that they were watching an episode of Porridge? The rookie officer Jon Aldridge was mild-mannered Mr Barrowclough, polite, decent and seen as a total soft touch by the inmates. I don’t know how the producers enlisted their subjects, but they struck oil. Some inmates were almost too funny and camera-ready to be true.”
Carol Midgely, The Times