“Less Lineker, and more voices of the real heroes of the campaign, and this would have been an excellent film” 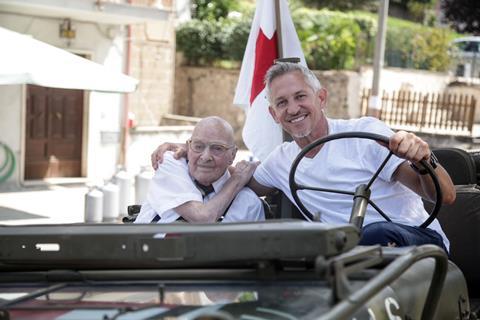 “Lineker is a decent interviewer, and a slick presenter. But did we really need the shots of him strolling along a beach or floating down the Rapido in a canoe wearing a life vest and crash helmet? Less Lineker, and more voices of the real heroes of the campaign, and this would have been an excellent film.”
Anita Singh, The Telegraph

“Celebrities are often used to make history programmes more ‘relatable’, but this wasn’t a dumbing-down job. Nor did Lineker make it all about him and his family; he welled up only once when he said he wished his mother could have seen her father being honoured.”
Carol Midgley, The Times

“This film moved from a moderately light-hearted segment, in which Lineker had a go at the shockingly brief medical corps training his grandfather would have undergone, to an evocative, terrifying portrait of a relentless battle in brutal conditions. Throughout, it felt abhorrent how little is known of the Italian campaign and each veteran offered valuable testimony.”
Sarah Carson, The i

The Secrets of Amazon, Channel 4

“This investigation could not exactly illuminate all the dark corners – devoting 30 minutes to the subject of Amazon is like writing a four-page pamphlet called Climate Crisis, but it was, nevertheless, deeply worrying, and a little wearying.”
Tim Dowling, The Guardian

“This is the TV equivalent of meeting another mum at the school gates and discovering to your relief that their life is as chaotic as yours. Despite being its target demographic, I don’t quite love Motherland. But it’s a funnier and truer depiction of motherhood than anything else.”
Anita Singh, The Telegraph

“This isn’t supposed to be an informative travelogue but instead, the entertainment relies on Richard Ayoade’s chemistry with his companions. In Madrid, his final trip, it was stand-up Ellie Taylor, and the sparks were a little lacking.”
Sarah Carson, The i