Gentleman Jack; What We Do In the Shadows 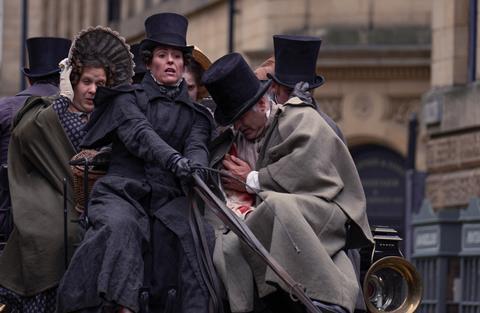 “There’s something for everyone in Gentleman Jack: frocks and wigs, speeding coaches and stately wood panelling, gender politics, social history and, of course, passion.”
Jasper Rees, The Telegraph

“This was a powerhouse performance by Suranne Jones. The problem was that she made most of the other characters look anaemic and incidental by comparison. Maybe that’s the point. Lister was a dynamic, one-off force of nature who found life in 1830s Halifax mediocre. But it meant the scenes without her were palpably weaker.”
Carol Midgley, The Times

“There were perhaps a few too many subplots in the opener, and I found the breaking of the fourth wall a bit superfluous. But addressing the reader was a classic 19th-century fiction trope and there’s more than a touch of Jane Austen here, both in the subtle wit and the sense of characters whose true nature is still to be revealed.”
Jeff Robson, The i

“The Beeb’s racy Gentleman Jack took a lusty delight in defying all the conventions of costume drama. We were treated to autopsies, vomiting, amputations, festering sores, gangrene and the slaughter of a horse with a pistol … and that’s not counting a very noisy lesbian love scene. Jane Austen was never like this.”
Christopher Stevens, Daily Mail

“As a romp, Gentleman Jack works fine. But while it is fun, and has moments of heart, it also has moments that seem to flirt with period drama parody. By the end of the first episode, at least, Gentleman Jack feels just slightly like a missed opportunity.”
Lucy Mangan, The Guardian

What We Do In the Shadows, BBC2

“What We Do In the Shadows is a deft and seductive comedy that has all the hallmarks of a series it will be easy to fall for completely. In an age of bloated television, where even comedies, which tend to benefit from a quick one-two punch, can seem overlong and self-indulgent, this is precise and lean, where every scene earns its place.”
Rebecca Nicholson, The Guardian

“There were gags about sex, blood and death, plus worshipful nods to Twilight and Interview with a Vampire. Whether the basic joke is enough for a whole series remains to be seen.”
Jasper Rees, The Telegraph

“This patchy comedy was a mock reality show about creatures of the night, a sort of Keeping Up With the Draculas. But it couldn’t decide if it wanted to parody horror movies or the Kardashians, and ended up missing both targets.”
Christopher Stevens, Daily Mail

“Not all the gags work but there’s a high laugh-out-loud ratio and there’s the same warmth and affection for the characters that made Flight of the Conchords such a success.”
Jeff Robson, The i