“If any current sitcom has a hope of being repeated 40 years from now, bet on Ghosts. It’s very funny but more importantly, it feels timeless” 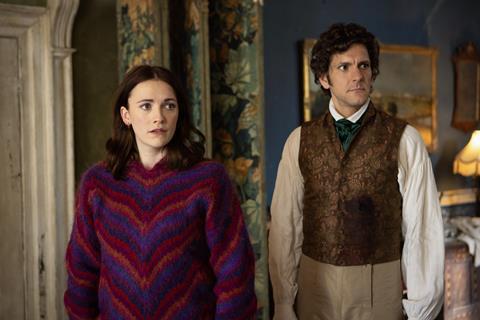 “If any current sitcom has a hope of being repeated 40 years from now, bet on Ghosts. It’s very funny but more importantly, it feels timeless. That’s partly because most of the characters are in historical costumes. Mostly, though, it is simply because the characters are the comedy. The more we get to know them, the funnier it all is. And it’s overflowing with jokes for everyone. The humour is innocent enough for children to enjoy, yet you’ll find smutty sniggers if you look.”
Christopher Stevens, Daily Mail

“Setting aside a running visual gag about a trouserless politician from beyond the grave, the supernatural comedy packed the giddy punch of classic kids telly. The jokes were broader than a poke in the eye with a plank of wood. Production values screamed CBeebies on a budget (even as they harked back to the glory days of Rentaghost and early Blackadder). The cast chewed so much scenery they were probably up all night washing wallpaper paste out of their mouths. But the half hour whizzed by. It was funny and delivered with such good cheer it was impossible not to get caught up in the spirit of things. Ghosts was never scary. But it was spooktacularly likeable.”
Ed Power, The Telegraph

“The episode would have fared better if Humphrey’s demise had been the only story; surely the Horrible Histories lot – who also write Ghosts – have enough jokes about the Elizabeth/Mary plot up their sleeves to last an hour. Instead, we were subject to endless storylines. The result was a busy hodge-podge, with jokes not getting the space and time needed to land. Ghosts is a cheerful, innocuous joy, but this episode was disjointed and directionless. Time to go back to basics.”
Emily Baker, The i

“In a way, Ghosts needs someone to die to swell the cast list. According to the first rule of fright club I’ve just made up, sitcoms need to introduce new characters by season three. Otherwise they are doomed to repeat minor variations on established themes with the same old characters until we all get bored and watch something else. My worry is that Ghosts will become ruined by the exclusivity of its admission policy. Somebody, preferably somebody likable and interesting, needs to die to save Ghosts. But who?”
Stuart Jeffries, The Guardian

“There were many voices in this grim, gripping 90-minute film that conveyed the scope of the unrest and the many lives shattered. Footage of those 1985 riots felt grainy and ancient. But, in the era of the smartphone and ubiquitous CCTV, the 2011 riots exploded onto the screen with a gripping ghoulishness that still felt surreal a decade on. This was a powerful oral history that communicated the sheer scale of the anarchy that rippled through British cities.”
Ed Power, The Telegraph

“Guy martin tried to generate some enthusiasm on The World’s Fastest Electric Car but it was easy to see he detests the technology. What he loves is an old-fashioned internal combustion engine. Much of the 90-minute show was filler, padded out as Guy made an electric motor from a potato and paper clips, and tried to set batteries on fire.”
Christopher Stevens, Daily Mail