“For those who enjoyed low-brow chortles and high-end cuisine, this will have gone down a treat” 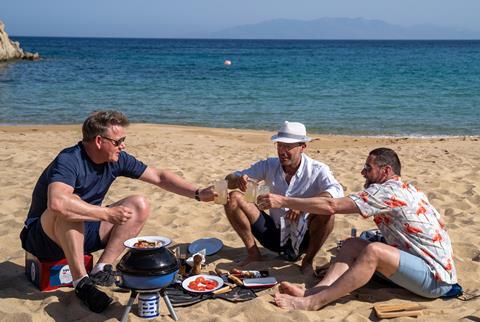 “Gordon, Gino and Fred Go Greek! was essentially ‘classic’Top Gear with fancy food instead of rumbling motors – and with more wink-nudge jokes than a Carry On… double-bill. And for those who enjoyed low-brow chortles and high-end cuisine, this will have gone down a treat. Viewers with an emotional age of 12 or older may, on the other hand, have despaired of a travel documentary that emphasised rib-poking over insight.”
Ed Power, The i

“I’ve tried, but whenever I watch them I itch to hit the off button then smash my head against the wall. Why, wherever they go, must they always have some kind of car crash or be a nuisance to local drivers? But of all the shows they have made, Gordon, Gino & Fred Go Greek did have the advantage of being the most visually gorgeous. You just can’t beat the Greek islands for take-the-breath away beauty (when their mugs weren’t in the way).”
Carol Midgley, The Times

“The F-word was used in every sentence and every shot by all three of the witless foodies. For men who are so snobbish about their refined palates, they don’t care what filth comes out of their mouths. It’s not just unfunny, it’s so monotonous it becomes unwatchable.”
Christopher Stevens, Daily Mail

Attack of the Hollywood Clichés!, Netflix

“Looking at the movie industry’s most frequently used tropes, it was made up of a plethora of clips, comments and a small but crucial extra measure of wit and deftness than the genre customarily manages. You felt like you were getting a lot of entertainment for your money/60 minutes of life, which was a nice change from the usual feeling induced by this sort of programme, ie that it was 15 minutes of material spread unforgivably thin.”
Lucy Mangan, The Guardian

“The first of two episodes took a familiar subject and gave it urgency by taking us through the action minute by minute. The result was a documentary done supremely well. Instead of stuffing the show with talking heads, as so many of these things do, the producers stuck to just two experts: Sir Max Hastings, the military historian, and Dr Onyeka Nubia, a university academic. Together with solemn narration by Tim McInnerny and simple graphics laying out the invasion plan, they provided a clear and detailed picture.”
Anita Singh, The Telegraph

“The cast’s comic timing is impeccable and impressive. But the whole thing left me cold. I can imagine this working a treat in the theatre, and feeling a communal sense of joy when sitting in the audience, but television puts viewers at a remove.”
Anita Singh, The Telegraph