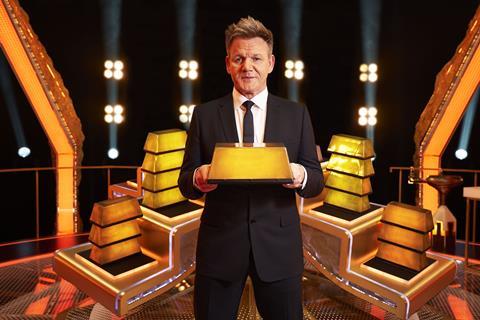 “As quizmaster, he’s a work in progress and certainly won’t be hosting Mastermind or University Challenge any time soon. But he brought a barnstorming enthusiasm to Bank Balance and was good value as a cheeky MC. It’s just a shame that the format – a lumpy gruel of general knowledge and collapsing bricks – was a bit of a mess.”
Ed Power, The i

“The trouble with this was that, even though Ramsay tried to whoop up tension, there just wasn’t any. I had assumed that Ramsay was hired to be a slightly bullying, exasperated host giving the participants hell, but here he was de-clawed and quite nice, which kind of defeated the object. It wasn’t the worst game show I’ve seen and it would be fine for cheap as chips daytime TV fodder. But not in a million years is it BBC prime time.”
Carol Midgley, The Times

“Truth be told, I went into this braced for a decent game show ruined by a bad host. In fact, it was the other way around. Ramsay was entirely competent and actually quite charming when dealing with the contestants. No, the problem here is the game itself. The design of the board means that it is difficult, as viewers, to work out when it’s close to tipping over – thus removing any sense of excitement.”
Anita Singh, The Telegraph

“It’s obvious within minutes that he doesn’t have the telly skills for this show, because he simply cannot think on his feet. Without a scripted quip, he’s floundering, ten seconds behind the action. As for the game itself … well, don’t ask me. I’ve only seen one episode. I haven’t got a clue about untangling the rules.”
Christopher Stevens, Daily Mail

“The Bay focused so much on the personal lives of the police that the crime felt at times like an after-thought. When you find yourself worrying more about how many portions of chips Armstrong’s family gets through rather than the identity of the killer, you know a crime show has lost its focus.”
Anita Singh, The Telegraph

“It is trash. Better yet, it is good trash. It deserves not a single award, until and unless someone creates a category for Most Absurdly Entertaining Entertainment or Series Most Aptly Described as Desperate Housewives Meets Gilmore Girls.”
Lucy Mangan, The Guardian

“Extraordinary Escapes with Sandi Toksvig continues to be a warm bath of relaxation, classy enough to be educational as well as pretty, but knowing where to stop. Toksvig is an amiable and knowledgeable host and this series is a far better use of her time and skills than making the odd lame joke about cakes.”
Carol Midgley, The Times