“From its second minute through to its conclusion, Grace was a queasily atmospheric plunge into darkness” 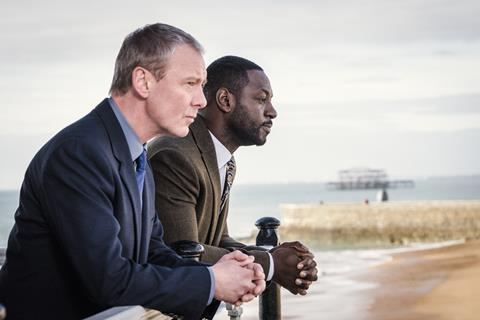 “From its second minute through to its conclusion, Grace was a queasily atmospheric plunge into darkness. Russell Lewis, once again adapting one of Peter James’s crime thrillers, delivered another complex, dense and occasionally gruesome narrative that never felt cluttered, and at its best could stand alongside his own enduringly excellent Endeavour. With complex protagonists, hateful crooks and plausible stooges, Grace may not have been quite amazing, but has earned its coveted spot among ITV’s crime perennials.”
Gabriel Tate, The Telegraph

“The cop show that last time gave us, via an in-coffin camera, a man buried alive has evidently decided that this was far too cheery. Last night it served up a plotline based on an internet snuff channel with people tortured and killed online while subscribers watched in the comfort of their homes. The weirdest thing of all is that it wasn’t totally terrible. Grace is largely hokum of course. But there was enough to keep watching. Although I wish I hadn’t.”
Carol Midgley, The Times

“The plot itself felt hackneyed and elderly. Nothing dates faster than technology, and this story, revolving around a flash drive for a laptop computer, was clearly dreamed up years ago. But with a cast as strong as this, plot is secondary. John Simm is always compelling.”
Christopher Stevens, Daily Mail

“The various threads were a little frenetic, but as the story wove together, the tension ramped up, with a final race against time providing ample nail-biting.”
Rachel Sigee, The i

“Television documentaries of this kind are powered by striking imagery. Sir David Attenborough’s Blue Planet II brought attention to plastic pollution by showing us shocking footage of its effects on wildlife. Our Changing Planet, despite the best of intentions, simply doesn’t capture this. The show is informative. But the sense of urgency was missing.”
Anita Singh, The Telegraph

“On at 7pm, the series is aimed at a young audience, which meant awkward attempts at adolescent humour. The locations were beautiful, the intentions laudable, but it was all a little childish.”
Christopher Stevens, Daily Mail

“Despite being written by John Morton of W1A fame, it really isn’t very funny. The show it most reminded me of was The Split, the BBC drama about a team of lawyers bonding over their triumphs and disasters. Eventually, Ten Percent started to grow on me. By the end, you may even be rooting for them.”
Anita Singh, The Telegraph

“It is the same sort of light, bureaucratic farce that typified W1A and Twenty Twelve, designed to elicit knowing chuckles rather than belly laughs. But even if Olivia Williams appearing as a very polite, likeable version of herself doesn’t excite you, Ten Percent achieves a gently bittersweet tone that ensures that, even if it’s not funny, it’s still eminently watchable.”
Nick Hilton, The Independent

“Everything about Gaslit is at the pinnacle of prestige television as it stands in 2022. It is based on a highly acclaimed podcast; it is a period drama that looks the business; it reframes a well-known historical story; and it is led by A-list movie stars, in this case Julia Roberts and Sean Penn. She is fantastic as the Washington wife and media personality who doesn’t play by the rules.”
Rebecca Nicholson, The Guardian

“Julia Roberts can elevate a scene with nothing but the staccato of her whisper or the anxious fondling of an earring. But not even Roberts’s blistering portrayal of a woman terrorised into silence is enough to save a drama that is somehow both plodding and overreaching.”
Amanda Whiting, The Independent