“Burns’s documentaries make you feel as if you are in a very refined, very expensive, very straightforward museum in Manhattan.” 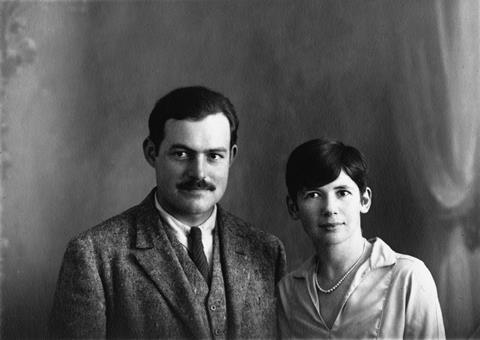 “The biographical work is skilfully done, and with great generosity to all participants in the myth. This paints as vivid a picture of Richardson, for example, as it does her soon-to-be-famous then newspaperman husband. The analysis is the real treat. In this first episode, Edna O’Brien talks of Hemingway and romance. “I liked that he fell in love, and he fell in love a few times,” she says. She thinks he needed to impress an audience, but “ruined himself” to do so. This documentary is as elegant as it gets.The real test is whether it works as well for people who know every line of Hemingway’s work intimately as it does for those who have never read a single short story, even the apocryphal six-word “baby shoes” story so often attributed to him. It is easily gripping enough to hold the attention of devotees and refuseniks, and it covers all the ground.”
Rebecca Nicholson, The Guardian

“Nobody would dispute Hemingway was one of the most influential writers of the 20th century and the father of the Great American Novel. He also lived an action-packed existence. Coyote recounted Hemingway’s formative years as the son of an overpowering mother and his experiences of the horrors of the First World War. It was all very stylish. Jeff Daniels delivered Hemingway’s thoughts in wonderfully evocative tones. Heavyweight contemporary novelists lined up to heap praise. “He was open to life, he was open to tragedy, he was open to feeling,” said Edna O’Brien. What was absent was a new perspective. This study of “Papa” didn’t preach. In fact, it did little beyond relay the nuts and bolts of his early life. How disappointing that such a revolutionary writer was dealt with in such an old-fashioned documentary.”
Ed Power, The i

“If you’ve seen Burns’s work before, you’ll know the drill – the camera slowly zooming in on a parade of grainy, black and white photographs, while Peter Coyote’s stately narration envelops you in a warm fug of authoritative biography. If the Library of Congress had a voice, it would be Coyote’s. Even his name fits the bill. Burns’s documentaries make you feel as if you are in a very refined, very expensive, very straightforward museum in Manhattan. Burns doesn’t do frills. He doesn’t put himself in the picture. You come here to learn about Hemingway, not admire the architecture. Burns, however, has a mission. And that is to tear down the myth of Hemingway, to get under that tough, gnarled skin, and find the real man underneath. We think we know him, we’re told in the opening exchanges: “wounded veteran and battlefield correspondent; big game hunter and deep sea fisherman; bullfight aficionado; brawler and lover and man about town.” But the Hemingway of legend, the brawny, boozy, blokey, misogynistic author of For Whom the Bell Tolls, A Farewell to Arms and The Old Man and the Sea, is just that – legend, myth, storytelling.”
Chris Bennion, The Telegraph

“The first episode sets the scene, using interviews with locals and Sophie’s family. There’s a garrulous publican, a poet, a Garda detective with a sing-song accent and an English investigative journalist, Ian Bailey, who moved there to write poetry and generally live the Irish good life. From a filmmaking point of view, you couldn’t hope for two more expressive and soulful nations than the French and the Irish. The interviewees offer little in the way of clipped stoicism, and lot of Gothic lyricism.”
Ed Cummming, The Independent

“From here, a horrific true-crime mystery takes on elements of farce and gothic morality play. There are libel trials, withdrawn testimonies, and gruesome allegations made in court about domestic violence. And a clash of cultures between a cosmopolitan corner of rural Ireland – Jeremy Irons own a castle in the vicinity and Graham Norton a holiday home – and the higher reaches of the French chattering classes. Netflix has not unearthed an obscure gem with this documentary series. Everyone in Ireland knows about Sophie Toscan du Plantier and has an opinion on Bailey and the allegations that he was victim of a police conspiracy. The murder has inspired a hit podcast, West Cork. And earlier this month, Sky Crime aired Jim Sheridan’s five-part Murder at the Cottage: The Search for Justice for Sophie. Sophie: A Murder in West Cork doesn’t bring anything new, though it comes close to taking a definitive stance who they think is the identity of the killer. It also glazes the case in a glossy Netflix sheen. Each twist and turn is relayed at a slow-burn tempo that will be familiar to viewers of Making a Murderer and The Keepers (and the even more outrageous Tiger King).”
Ed Power, The Telegraph

“Susan is an inspired choice for a tour of the country’s favourite resorts, including Blackpool, Brighton and Southend, all this week. A regular panellist on Radio 4’s News Quiz, she has made a couple of stabs at hosting gameshows, with The Boss and Armchair Detectives. But her natural enthusiasm can be overwhelming in a studio setting. Like a nervous hostess organising party games, she talks too much. She’s far better bouncing around in the outdoors. ‘I genuinely love this,’ she kept shouting, and whether she was touring the miniature village or riding the 90-year-old wooden roller coaster, she plainly meant it. Her ad-libs flow naturally, when she isn’t trying to follow a script. Faced with a full English at her bed-and-breakfast, she quipped: ‘I like nothing more than a plate that’s bigger than my own head.’”
Christopher Stevens, Daily Mail