How to Save a Grand in 24 Hours; Countdown to Surrender; Long Lost Family; Taken

“In its own unflashy and generous way, programmes like this are about as public service broadcasting as you can get.” 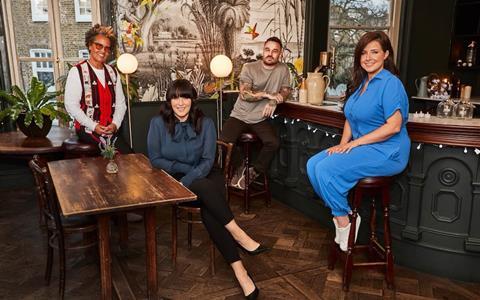 “For obvious reasons we’ve had a lot more of this easily produced, chipper lifestyle telly of late. But even before the pandemic it was also Channel 4’s bread and butter, plonked (sometimes with faint embarrassment) in peachy primetime slots to harvest the ad revenue that allows it to do all the worthwhile, diverse stuff the channel is now bigging up as it seeks to fight government plans to sell it off. In fact, you feel the broadcaster should talk more about shows such as this and the real emotional and practical differences brought to lives like Matt and Neil’s. In its own unflashy and generous way, programmes like this are about as public service broadcasting as you can get.”
Ben Dowell, The Times

“It was a show with a mix-and-match feel, as presenter Anna Richardson went through the couple’s bills, chef Gary Usher taught them how to cook cheap meals, decorator Eve Humphreys did some DIY and Peachy Clean (not, I would hazard, her real name) showed them how to keep the house looking nice on a budget. There were useful household tips scattered here and there. But it was difficult to see how all this was adding up to the £1,000 saving of the title.”
Anita Singh, The Telegraph

“The fact that the average British male now needs to be shown how to put up shelves is a vivid illustration of how the basic domestic skills of previous generations have been lost. The other tips in this episode seemed embarrassingly obvious. Chef Gary Usher advised us to stop buying expensive cuts of meat. Cleaning lady Peachy proposed we could give the inside of the oven a scrub ourselves, rather than paying a professional to do it for us. That’s about as helpful as suggesting it’s cheaper to walk the dog than hire a taxi to take Rover to the park.”
Christopher Stevens, Daily Mail

“The Second World War has been schedule-filler for years, yet TV folk have often struggled for fresh ways into the subject. But hold the Siegfried Line washing pegs for a second, Countdown to Surrender: The Last 100 Days actually managed it rather neatly, proving to be a sensitive and illuminating account of the conflict’s final splutters. German-produced and featuring two (very articulate) German historians (alongside our own Antony Beevor) it worked principally because it recreated the heat of its moments and delved into the minds of people who didn’t know it would end with suicide in a Berlin bunker and kisses in Leicester Square. It was strangely, exhilaratingly tense.”
Ben Dowell, The Times

“Countdown to Surrender – The Last 100 Days is an excellent documentary series about the end of the Second World War. The unusual thing is that the story is told from the German perspective. This means that, to a British audience, the content feels different to what we’ve seen before. In a TV landscape where so many history documentaries take a headline-grabbing position, the series felt like a serious piece of work.”
Anita Singh, The Telegraph

“It took me exactly 10 minutes and 11 seconds to burst into happy tears at last night’s heartwarming episode of Long Lost Family. The series has been on for a decade but its continuing power to move and entertain is a sign that the formula still has life. Long Lost Family could so easily veer into dangerous waters – family reunions have long been the bread and butter of lowbrow, exploitative TV. But it’s clear that the production cares deeply about its subjects. It is television that strikes that rare balance between compassion and intrigue.”
Emily Baker, The i

“The interest lies in the ever-compelling story of how the police build a case, especially one crossing countries. At times, it feels a little too smooth. There are moments when this begins to feel like an advert for regional organised crime units. On the other hand, the sight of a group of people in power working competently towards making the world a slightly better place is a balm of its own.”
Lucy Mangan, The Guardian