“Imagine: Miriam Margolyes surpassed all expectations. It was a joy from start to finish and easily the best one I’ve seen” 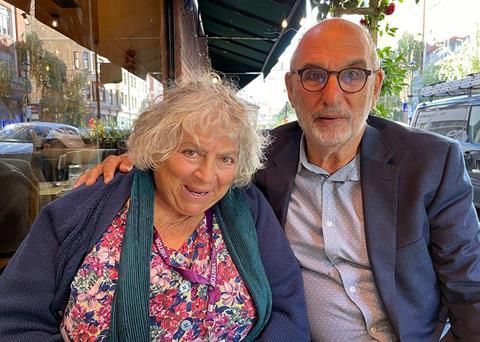 “Whatever your view of Miriam Margolyes (I think she’s fabulous), you cannot deny that she comes with a guarantee: she is biologically incapable of being dull. But Imagine: Miriam Margolyes — Up for Grabs surpassed all expectations. It was a joy from start to finish and easily the best one I’ve seen.”
Carol Midgley, The Times

“Margolyes is pathologically honest, admitting here that she once struck her paralysed mother when the stress of being her carer became too much. She was frank about everything else, too, from her career insecurities to sex, and admitted to feeling both bemused and delighted by her latest stage of fame as she enters her ninth decade. Some people find her too coarse and too much. But in a world where so many celebrities are PR-trained bores, let us be thankful for one who makes an effort to keep us entertained.”
Anita Singh, The Telegraph

“Miriam Margolyes is an actress of extraordinary talents — a brilliant mimic, a magical voiceover artist, a fine reader and a rambunctious scene-stealer. She is also very difficult to like. It’s not merely that she is coarse and vulgar. She sets out to shock, with complete disregard for other people’s feelings, and then takes umbrage when they are offended. Yentob has been presenting these arty biographies for years, but his interview style has not advanced beyond a list of prepared questions. He doesn’t probe, he just offers prompts.”
Christopher Stevens, Daily Mail

”This startling, terrifying documentary offers up a potted history of Navalny’s anti-Putin, pro-democracy activism. At times, he seems like a one-man opposition: equal parts politician, provocateur and investigative journalist. Navalny’s 2020 near-death experience occasioned by Russia’s signature nerve agent novichok is the heart of this film. While recovering in Germany, he joins forces with Bellingcat investigative journalist Christo Grozev in an attempt to dig out the facts about his poisoning. What ensues is remarkable – the point at which Navalny enters the realms of the entertaining but far-fetched espionage thriller.”
Phil Harrison, The Guardian

“Some of what appeared in Daniel Roher’s film you had probably seen before and it did rather skim his previous associations with far-right activists, but it deserves five stars for that prolonged, jaw-dropping scene in which Navalny, pretending to be a government goon, prank-called the chemist who prepared the Novichok and he spilt everything.”
Carol Midgley, The Times

“An unnecessary and superficial documentary dredging up an old crime spree that targeted Paris Hilton, among others. It’s a mystery why the story is being revived now. The film was mainly interviews with two of the gang’s vapid members, Prugo and Alexis Neiers. Prugo smirked from beneath a succession of stupid hats. Neiers pouted between make-up touch-ups. In a sense, one can’t blame them for behaving like stars, because the programme-makers treat them as such and have made a failed attempt to give the show a layer of ironic cool.”
Anita Singh, The Telegraph