Imagine: This House is Full of Music; Natalie Wood: What Remains Behind; Jack Whitehall’s Sporting Nation

“The music was gorgeous. The family were delightful - engaging, thoughtful and as far from being showbiz brats as it’s possible to be” 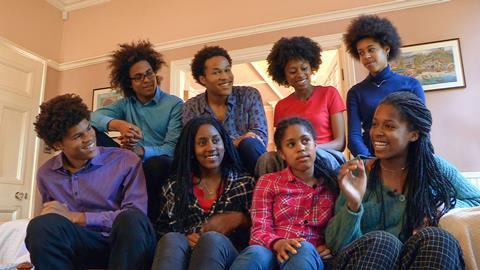 Imagine: This House is Full of Music, BBC1

“There are seven Kanneh-Mason siblings, aged from 10 to 24, their parents, Stuart and Kadiatu, speak with knowing passion about the virtue of the arts when it comes to education. Music, they say, should be there for everyone. “If it’s taken away, the consequences for all children will be terrible.” This is a rare moment of seriousness and depth in an otherwise gentle film, and it’s a shame there are not more discussions like this. It feels old-fashioned. Mostly, it is flawless, though I enjoyed the odd moment of upset, such as the interruption of a performance by Isata by an Amazon delivery. It is more of a compilation tape of performances than it is a documentary about the family. The performances, however, are gorgeous.”
Rebecca Nicholson, The Guardian

“It’s hard to believe that the family, holed up together for lockdown with Sheku’s flatmate from Brazil and with all their concerts cancelled, made this delightful film on their phones in a single day, presumably with a budget of £0. Rare also that there wasn’t a cross word between them (perhaps that was when the phones stop recording). However, as Yentob said, this huge old rambling house was “like no other”. They were just a lovely family full of lovely children giving concerts for neighbours in the street while a camera panned to empty parks and playgrounds.”
Carol Midgley, The Times

“The music was gorgeous. The family were delightful - engaging, thoughtful and as far from being showbiz brats as it’s possible to be. Yentob asked them a couple of questions, including how they found enough time and space to practise. But there was frustratingly little else by way of inquiry, which was odd for an arts series that usually prides itself on in-depth profiles. How did non-musicians Stuart and Kadiatu, a hotel executive and university lecturer respectively, produce seven children with such passion and talent for music? Were they the classic pushy parents? Have any of the kids been through a period of rebellion by, I don’t know, listening to terrible Europop or declaring that they’d rather study Further Maths?”
Anita Singh, The Telegraph

“The sheer variety of music they chose for this documentary, presented by Alan Yentob, was boggling. Sheku and a family friend, Plinio, played an arrangement of the folk song Scarborough Fair on guitar and cello in the garden with the foxgloves dancing. Their mother was born in Sierra Leone, their father’s family comes from Antigua, the younger girls go to a Catholic school in Nottingham and they all love Jewish dance music. Fabulous! In a society where divisions are being exacerbated by sour protests, what a joyful sunburst of hope this family is. They embody everything that is best about Britain today. This is a programme I know I shall watch again and again.”
Christopher Stevens, Daily Mail

“This was a tender eulogy to a superstar crafted by her daughters, so it lacked the journalistic rigour of a standard documentary. You can forgive them that. Ever since Wood drowned in mysterious circumstances aged 43 in 1981, the whispers, nudges and gossip mags have dogged their lives, particularly that of her husband, Robert Wagner, whom some think was “involved” (he fiercely denies it; they believe him). If that was the gaudy tabloid filter, this documentary was the soft lens. But Natasha Gregson Wagner’s interview with her stepfather “RJ” Wagner was compelling, if a little rehearsed sounding. Wagner spoke in the low monotone of a man who has recounted these events many times, especially in his head.”
Carol Midgley, The Times

“This was a flawed project from the start. It was directed by the film-maker Laurent Bouzereau, but to all intents and purposes it was an officially-endorsed product from Wood’s daughter, Natasha Gregson Wagner. Any hope of searing honesty from an interview about this was dashed by Gregson Wagner’s approach. And so Wagner was allowed to recount his version of events with no questions asked. As a straightforward eulogy to Wood, with high calibre contributors (Robert Redford, Mia Farrow) and fond reminisces from family members, it worked, showing her as a hard-working actress, a loving mother and a woman who fought to escape both an overbearing mother and the strictures of the Hollywood studio system. But what remained behind was the feeling that we were only being given part of the picture.”
Anita Singh, The Telegraph

“I am as surprised as anyone to be giving a four star review to a self-congratulatory show made up largely of old clips of Britain’s sporting achievements. But the first instalment of Jack Whitehall’s Sporting Nation, in which the ubiquitous comedian looks back on our rare achievements and frequent disappointments in the world of sport, was a pleasant surprise. The opening half-hour episode, a potted history of the UK’s triumphs on home soil, was both entertaining and informative, thanks mostly to Whitehall’s tongue-in-cheek, deprecating voiceover. Being British and a fan of sport means accepting that Britain (or, in many cases, England, as the show was pretty Anglocentric) isn’t as Great as it claims to be.”
Emily Baker, The i

“This was the latest attempt to fill the gaping hole, both in the TV schedules and our lives, left by the Covid-induced cancellation of so many major sports events. It won’t win any awards for originality but it did a thoroughly decent job. The script – co-written by award-winning sportswriter Jonathan Liew, formerly of this parish – was smart, snappy and well-judged. There were gags about VAR, boring old John Major, plucky old Tim Henman and when to put milk in one’s tea. There was even time for a sly dig at the French.”
Michael Hogan, The Telegraph