Inside No 9; Russian Doll;The Thief, His Wife and the Canoe

‘An embarrassment of comedic riches lavished on a single episode’ 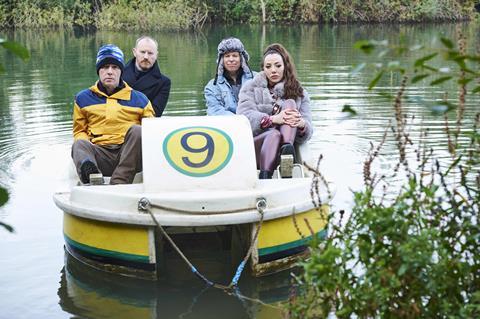 “To borrow a cliché from the Ferrero Rocher advert: Inside No 9 (BBC2) , you are really spoiling us. Not only did last night’s episode deliver the treat of Mark Gatiss, making this a League of Gentlemen reunion, it gave us Diane Morgan too. An embarrassment of comedic riches lavished on a single episode. You’d think they might want to eke out such big guns with five episodes to go.”
Carol Midgley, The Times

“Inside No. 9 is now in its seventh series, and some of the half-hour scenarios have been extraordinarily convoluted. Last year’s batch began with a jewellery heist with characters taken from the traditional Italian panto style of commedia dell’arte. This latest story was less mannered, and better for it. The pedalo got stuck in the middle of the lake, the old friends bickered, and when one of them revealed a bereavement, the mood turned dark … as it always does in this show.”
Christopher Stevens, Daily Mail

“This is a truly gorgeous series, from its aesthetic to its script, and it feels incredibly rich. It is filled with directorial homages to 1970s cinema, particularly the films of Robert Altman, and there are lots of clever scenes involving mirrors and reflections. It is stuffed with Lyonne wisecracking and swaggering around a variety of locations (again, I’m wary of spoilers, though New York City is a key character at this point) in her trenchcoat and sunglasses, to an apt soundtrack of Depeche Mode’s Personal Jesus. She is mesmerising as she lobs out erudite riffs on anything from hospital waiting rooms (“Is the hospital actually treating patients today or are we just putting on a Beckett play?”) to her inability to give up smoking: “I am keenly aware that my lungs are essentially two shrivelled up Nick Caves.” Just wait until she says “cockroach”.”
Rebecca Nicholson, The Guardian

“Even though this second outing can’t quite replicate the hypnotic rhythmicality of the 2019 series, it is testament to the ingenuity of [Natasha] Lyonne (and her co-creators, Amy Poehler and Leslye Headland) that the show does not really try to. This new season is less a Russian doll than a Fabergé egg. Gilded, ornate, almost ostentatiously clever and beguiling, but with that crucial surprise – a nugget of emotional clarity – that emerges as the egg is cracked.”
Nick Hilton, Independent

The Thief, His Wife and the Canoe, ITV

“If this had been fiction, people like me would probably have panned it for being far-fetched. Eddie Marsan’s depiction of John Darwin has been first-rate, a deft portrait of a man so narcissistic that, when he was allowed two minutes with his wife when they were both being held in jail cells, he tried to have sex with her.”
Carol Midgley, The Times