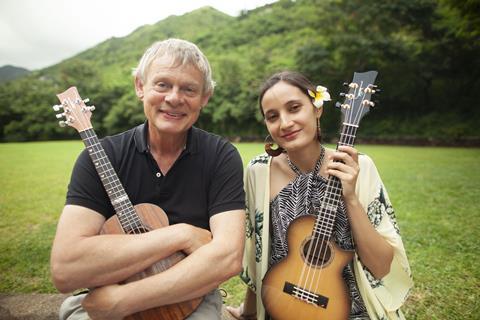 “If Martin Clunes: Islands of America promised yet more presenter-on-a-journey travelogue blah, it turned out to be a bit less insipid than that, finding some less-told stories from America’s offshore outposts.”
James Jackson, The Times

“This was a handsomely shot exploration of American life past the mainland margins and Clunes made for an engaging guide – full of gentle curiosity, infectiously enthusiastic for new experiences. Celebrity travelogue might be an over-stuffed TV genre but Clunes is one of its better exponents.”
Michael Hogan, The Telegraph

“Visiting the USA’s most far-flung outposts, the star of Doc Martin shook hands, smiled and bowed with all the grace of a minor royal on walkabout. But he stuck mostly to the tourist trail. This was more holiday than travelogue.”
Christopher Stevens, Daily Mail

Paxman on the Queen’s Children, Channel 5

“Amid this feast of epigrams and insights, or ‘randy Andy’ and Koo — this really was the most entertaining thing on Channel 5 in some time — was it wrong to start feeling an odd nostalgia for the good old days of naughty love lives and the ridiculous It’s a Royal Knockout?”
James Jackson, The Times

“Decades of cross-examining politicians have convinced Jeremy Paxman that the role of Britain’s figurehead ‘should be kept out of the hands of those who want the job’. He’s right, of course. But the sheer assurance with which Paxman issues these edicts is breathtaking to see. There’s no more self-confident performer on television. He makes Alan Yentob look bashful, and David Dimbleby appear racked with doubt.”
Christopher Stevens, Daily Mail

“It was hard to quibble with the choice of a computer genius as the century’s most influential innovator. Still, a live show pitting David Bowie against Nelson Mandela is by definition a curiosity and all the way to the end Icons could never escape its own inherent preposterousness.”
Ed Power, The Telegraph

“As a programme, Surviving R Kelly is deeply flawed. At best, it treads a fine line between attesting to the apparent pain of those taking part and exploiting it – and often gives in to temptation. Perhaps more importantly, the programme doesn’t push any of Kelly’s entourage about alleged complicity. If you are going to show people’s pain like this, should it not be done in the service of some kind of reckoning?”
Lucy Mangan, The Guardian