Judi Dench’s Wild Borneo Adventure; Inside the Bank of England

“There is nothing here we haven’t seen before, but the facts and figures remain astonishing.” 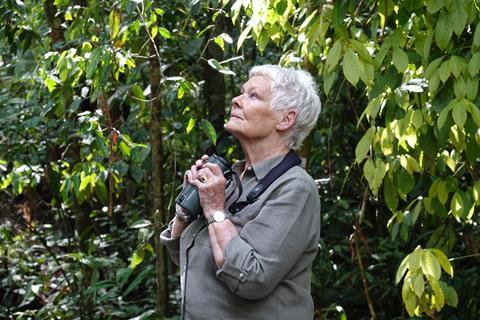 “Wild Borneo Adventure was the kind of jolly-with-a-point that is occasionally offered to national treasures. There is nothing here we haven’t seen before, but the facts and figures remain astonishing. Dench’s greatest contribution – apart from pulling in the punters in the first place – was to treat every revelation of the forest with equal awe and wonder.”
Lucy Mangan, Guardian

“Travelogues are best when they keep it simple and this benefited from not traipsing about the country too much (as Lumley, Perkins and the like have done on their TV jollies). It didn’t need to, for the special sauce is not in the de rigueur environmental message, but simply in sharing Dench’s gentle joy at witnessing dung beetles.”
James Jackson, The Times

“Throughout, Judi was careful to remind us of the ecological benefits of orangutans, sun bears and even dung beetles, who all play a role in Nature’s grand interlocking scheme. Otherwise we might have gained the impression that she was just enjoying the adventure holiday of a lifetime.”
Adam Sweeting, The i

“This show is part of a new trend for sending veteran thespians on safari, instead of the usual self-centred comedians, and this was certainly the right Shakespearean legend for the job. She proved courageous, witty, bouncing with energy and constantly curious.”
Christopher Stevens, Daily Mail

Inside the Bank of England, BBC2

“It’s an important time to be explaining this stuff for idiots as well as for the Bank of England to be showing some transparency, although the programme probably didn’t need the docusoap trimmings, such as witnessing the parlour stewards as they laid the breakfast table with painstaking precision, impressive as this was.”
James Jackson, The Times

“Although Lesley Sharp delivered the commentary in an extremely serious voice against a background of ominous music, it was difficult to get too excited by assorted experts mulling over whether interest rates should rise or fall.”
Adam Sweeting, The i

“Aware that they had a very dull two-parter on their hands, the producers combed their footage for anything vaguely slapstick caught on camera. If two men in suits have accidentally bumped against each other in the bank’s marble corridors during the past year, you can bet you’ll see it here. The whole episode built up to the momentous decision in May last year not to raise interest rates. I was desperate for a robbery, just to liven things up.”
Christopher Stevens, Daily Mail