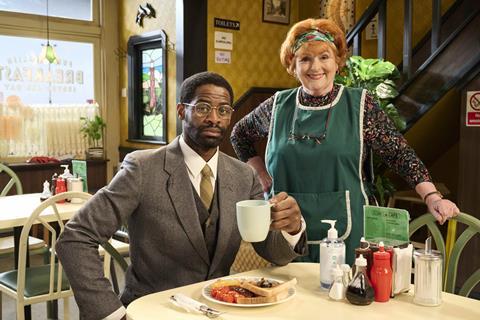 “The laughs were smeared through Kate and Koji like ketchup lathered on a bacon butty, as the restaurant-set sitcom returned for a second series. Koji’s storyline proved that the archaic British sitcom model wasn’t entirely defunct. As the canned laughter rained down, the show also skewered the state of modern Britain, the only country in Western Europe to require women and children to fill out a form as they flee a war zone.”
Ed Power, The i

“This is confusing. The writers appear to be aiming for an old-fashioned, Open All Hours sort of comfort comedy, yet every few minutes one of the characters will deliver a solemn lecture about the Government’s terrible treatment of asylum seekers. The animosity between Kate and Lavinia is amusingly done. But most of the gags are groan-worthy and signposted from miles away.”
Anita Singh, The Telegraph

“It is a stale pudding of a comedy that feels as if it was dug up from 1982, and not in a good way. It has massive potential for clever observation. It’s just that having set it up, Andy Hamilton and Guy Jenkin, the talented writers behind Outnumbered and Ballot Monkeys, bafflingly fail to make any of it funny. It was as if they had been taken hostage and impostors had written it.”
Carol Midgley, The Times

“There is quality black humour to be found here and few no-go areas. It’s not every comedy that would dare to try and get laughs from a bald teenager suffering from Hodgkin lymphoma, whose mother calls her ‘a bit of an arsehole’. Yes, I can see on paper that sounds really quite tasteless. But it was done well, if that even sounds possible.”
Carol Midgley, The Times

“Council House Swap is a programme so dreary that it asks us to care about people looking around a prospective new home and saying, ‘Hmm, but there’s no dishwasher.’ After 20 minutes, I felt as if I’d been watching the thing for two hours. I wish all the contributors well in their house-hunting endeavours, but this is not good TV.”
Anita Singh, The Telegraph

“This unhurried but fascinating four-part documentary does a fine and careful job of explaining what happened. Those with any experience or knowledge of psychologically abusive and coercively controlling relationships will find much that is familiar.”
Lucy Mangan, The Guardian