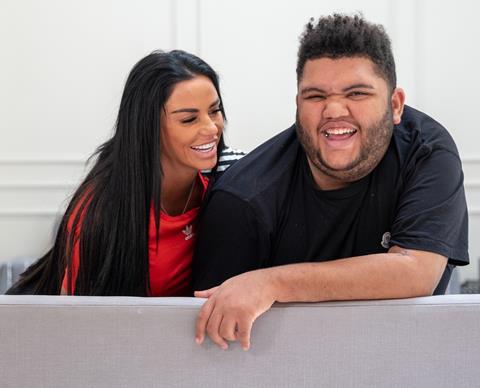 Katie Price: Harvey and Me, BBC1

“Katie Price: Harvey and Me portrayed the ferocity of maternal love, and showed Price in a new, more meaningful light. I rather admire Price for her business brain and ruthless media savvy, but I never expected she would make me weepy. Price has traded on being shallow; here we saw her hidden depths.”
Carol Midgley, The Times

“You were left feeling enormous admiration for the way that Price – and every other parent to a disabled child – copes with the day-to-day, particularly with other children to look after. Price’s celebrity was irrelevant to the programme. She was not here as a famous person, but as a parent whose dilemma will be familiar to many.”
Anita Singh, The Telegraph

“Her career as model and reality star were put to one side in the heartbreaking but ultimately uplifting Katie Price: Harvey and Me, which broke new ground in presenting Price as a subject worthy of a serious BBC1 documentary. This was a hugely moving portrait of the artist formerly known as Jordan as mother and carer of her disabled teenage son Harvey.”
Ed Power, The i

“This documentary did not shy away from depicting the exhausting challenges of caring for a teenager with severe autism — and, in Harvey’s unique case, other complex conditions including partial blindness and hormonal disorders. Most of all, this hour gave the lie to the idea that autism is an emotionless condition. Harvey is an affectionate and friendly boy who adores his mother.”
Christopher Stevens, Daily Mail

“Made by a longtime friend of the family, it has the inescapable feel of a pre-emptive strike against media criticism Price is likely to face for ‘sending her child away’. And that countering is well done.”
Lucy Mangan, The Guardian

“Zoe Lyons is an assured host and keeps the chat going as fast as the quizzing, although she has no scope to be funny. It’s a perfectly fine way to spend half an hour, and you can see that the questions would be harder to answer under pressure than from the comfort of your armchair. But let’s be honest: it’s no Eggheads.”
Anita Singh, The Telegraph

“There’s the kernel of a great game in Lightning. Throughout each round, every correct answer gave players the right to nominate a rival to face the next question. Whoever was in the spotlight when time ran out was disqualified. That’s neat and simple. Everything else was a distraction.”
Christopher Stevens, Daily Mail

“As with Euphoria’s first season, this instalment plunged into a deep well of teen angst. This was heavy going. But the series was again to be commended for taking seriously issues such as teen sexuality and gender identity and for exploring how childhood trauma can follow us into young adulthood.”
Ed Power, The i

“The show’s two special episodes were shot according to filming restrictions and as a result feature little of the trippy tricks that distinguished Euphoria’s first season. Hunter Schafer is granted the opportunity to flex as an actor. Her portrayal of Jules is phenomenal; her vulnerability is palpable. The episode is a clear indicator that Schafer wasn’t being used to her full potential in season one.”
Annabel Nugent, The Independent