Kicking Off: The Rise and Fall of the Super League; The Dry

“I could have listened to this quite happily, but watching it was exhausting” 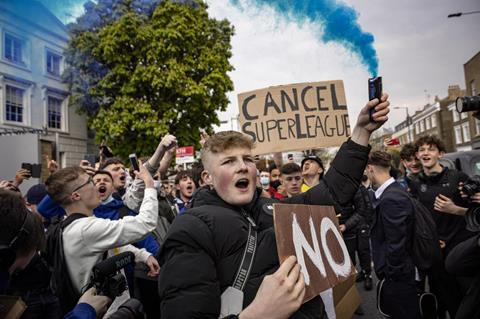 Kicking Off: The Rise and Fall of the Super League, BBC2

“Kicking Off: The Rise and Fall of the Super League recalled how the dreams of greedy billionaire owners were scuppered by outraged fan power. Unfortunately, Jason Bernard’s documentary was almost unwatchable at times thanks to its hyperactive, migraine-inducing editing. It was as if an evil mastermind was trying to brainwash you with subliminal but very literal-minded images. This was no doubt to distract from the fact that the programme was otherwise made up of talking heads.”
Gerard Gilbert, The i

“The documentary should have come with a health warning. So frenetic was the editing, so determined to bombard us with images, that the whole thing gave me a thumping headache. The problem here was that the saga couldn’t easily be portrayed visually; this deal was drawn up behind closed doors. So the various talking heads were interspersed with hundreds of images, thrown at the screen in an attempt to make it look interesting, and a smart alec voiceover which made me want to throw my TV out of the window. I could have listened to this quite happily, but watching it was exhausting.”
Anita Singh, The Telegraph

“The football documentary has left my eyeballs on the point of explosion. For the entire hour, the screen flickered with subliminal images, many appearing for less than a second, that throbbed in time to truncated bursts of Mozart or 1990s rock. Moments of newsreel, cartoon, black-and-white film and stock photography whirred past like the pages of a flickbook. The effect was physically nauseating and exhausting. Because this is the Beeb, the documentary included a half-baked attempt to smear Boris Johnson for this scheme. Strip away the atrocious visuals and the political bias, and there was about enough material in this overblown programme for a ten-minute podcast.”
Christopher Stevens, Daily Mail

“For me, the most memorable part of this entertaining, sprightly documentary was not the football club maestros’ outrageous, rampant greed in trying to create a closed-shop league — which would spew out yet more money for bigwigs while trampling on loyal fans — because I don’t think anyone is terribly surprised when football bosses show avarice. No, it was the Mickey Mouse way in which the plan was executed. Even their press release announcing the ill-fated European Super League looked, it was said, like it had been thrown together by a student.”
Carol Midgley, The Times

“What – as Lord Sugar might have said, were the former Tottenham Hotspur chairman not part of the problem – a load of old tut. Another less flattering version of the story was airbrushed from this documentary. Fans of leading clubs might just as easily be thought of not as resisting capitalistic excess, but as implicated in its spread. That story would tell how football has deracinated communities, introduced pricing policies that make opera seem affordable and colluded with the world’s most despotic regimes, while fans cheer from the sidelines.”
Stuart Jeffries, The Guardian

“We’ve had plenty of comedy-dramas with messy heroines, and this one isn’t in the Fleabag league. It’s uneven but Roisin Gallagher’s performance is good enough to keep you watching; you’ll care about what happens to her, and cringe at her mistakes.”
Anita Singh, The Telegraph