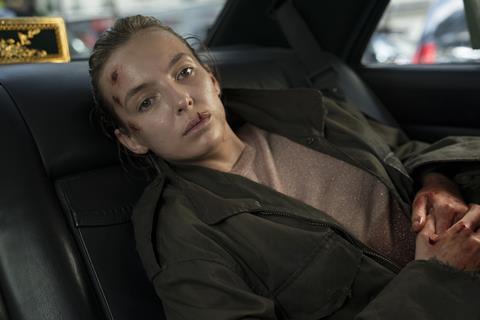 “If the script is a tiny bit less nuanced and the whole not quite as light on its feet as the first season was, it hardly matters. The core of its success – the relationship between Villanelle and Eve – remains intact and further torqued by events. It is still stylish, sexy and gorgeous. Watching it feels like lying on a blood-soaked chaise longue and eating cherry liqueurs by the handful.”
Lucy Mangan, The Guardian

“This was a hesitant start, taking up 30 seconds after the first series ended with Eve running through Paris having stabbed Villanelle. It was a bit dull, a bit slack. But then Villanelle (spoiler alert) broke the neck of that 12-year-old orphan boy and it snapped back to form. That one can write such a sentence and genuinely mean it shows what a brilliant creation Villanelle, played exquisitely by Jodie Comer, is.”
Carol Midgley, The Times

“Emerald Fennell, who has taken over scriptwriting duties from Phoebe Waller-Bridge, proves attuned to the show’s polished dissonance. It’s as deft and ironic as ever and looks ravishing.”
Jasper Rees, The Telegraph

“I returned to The Handmaid’s Tale heavy of heart. The relentless misery and torture had begun to grate in the previous series. This was in fact a terrific episode. We also got the Boomtown Rats singing I Don’t Like Mondays, which was left-field. Much needed are these spots of light amid the darkness.”
Carol Midgley, The Times

“There wasn’t a lot of dialogue in this opening episode – nobody talks much in Gilead. But at the heart of it were gut-wrenching exchanges between June and her daughters’ other mothers. Both scenes had painful things to say about the complex bonds forged by surrogacy and adoption. It may be too in love with the slow burn of visual storytelling, but The Handmaid’s Tale still knows what it’s about.”
Jasper Rees, The Telegraph

“Series two was formulaic, baffling, slow, repetitive and ugly… until, with a couple of episodes to go, it suddenly came to its senses. The characters seemed to wake up and realise that The Handmaid’s Tale isn’t meant to be a thriller or a political satire. Thank goodness, as the show returned, it stayed true to this theme.”
Christopher Stevens

“The encouraging, relentlessly positive tone could begin to pall in a few weeks’ time and the pace was too ponderous, getting through just 10 acts in 95 minutes. Still, The Voice Kids provided diverting enough family entertainment (at least for those old enough to stay up until its 9.35pm finishing time) until the higher-rated, more addictive contests arrive in autumn.”
Michael Hogan, The Telegraph