“Exhilarating, eccentric and endlessly surprising – Landscapers might have left it late but it’s one of the best dramas of 2021.” 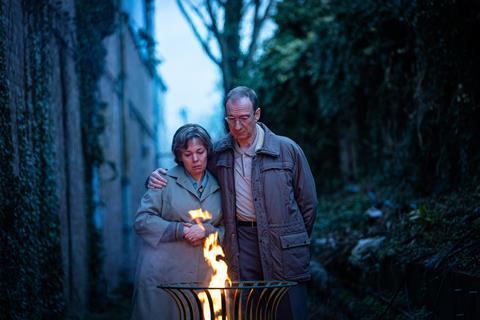 “Olivia Colman gives a career-best performance as Susan in the four-part drama Landscapers, exquisitely, tenderly and comically written by Ed Sinclair. The project would have been almost impossible to sabotage, no matter who was cast as Chris, but we have David Thewlis, and it’s a matchless combination. Imagine two of the greatest actors of their generation being even better together than they are separately. That’s Landscapers. It is a rich, generous, clever, multi-textured thing, immaculately played by all the main actors, but awards for Colman, Thewlis and the script must surely be given. Consider it the first of your Christmas treats.”
Lucy Mangan, The Guardian

“Colman tackles her darkest role yet in Landscapers and, alongside the reliably brilliant David Thewlis, she shines in this beguiling four-parter, which is one of the most breathtakingly beautiful dramas you’ll see all year. Together they’ve created a blackly comic, tonally playful gem which will stay with viewers for days after the credits roll on the final episode. Exhilarating, eccentric and endlessly surprising – Landscapers might have left it late but it’s one of the best dramas of 2021.”
Michael Hogan, The Telegraph

“Everything about her performance in Landscapers is convincing and real, even though the storytelling – by Colman’s husband Ed Sinclair – in this true crime drama is highly stylised. Despite a great supporting cast – Kate O’Flynn and Samuel Anderson as a pair of provincial plods, Daniel Rigby as their foul-mouthed police boss – this is Colman’s show. So far, the crime itself has been incidental. If it must be squeezed into any genre, this unique four-parter is really a true romance.”
Christopher Stevens, Daily Mail

“This was slow-moving and atmospheric – and all the better for it. More of a character study than a plot-heavy thriller, Colman and Thewlis’ oddball performances were bewitching and allowed us to get to know Susan and Chris before the investigation into the murders began. Landscapers isn’t a twisty, suspenseful true crime caper, but isn’t that tired and overdone? Maybe a prestige cast, gorgeous filmmaking and an intricate style of storytelling is exactly what this genre needs to be brought back to life.”
Emily Baker, The i

“The 1950s silver-screen and stage-play conceits were a fresh, imaginative way of dramatising true crime, and Ed Sinclair (Colman’s husband) has produced a fresh, zingy script. So here’s my somewhat hypocritical take: I’m queasy about the memory of the murdered couple, but on the other hand it’s one of the most original dramas I’ve seen in years.”
Carol Midgley, The Times

“Two Doors Down’s method is to lure you in with the homespun, old-sitcom, multi-camera set-up and then slap you round the chops with sudden bursts of ribaldry. There’s effing and jeffing where you least expect it, a sturdy reliance on poo jokes and a lot of saying the unsayable (where the unsayable might actually be best left unsaid.) What saves Two Doors Down from the realms of utter dreck is the performances, which are the definition of making the best of a bad situation. Arabella Weir, in particular, fashions a believable character out of half an hour of mildly-miffed reaction shots.”
Benji Wilson, The Telegraph

“The formula was as rumpled and comfortable as a faded sofa from the 70s, as plans by Beth (Arabella Weir) and Eric (Alex Norton) for a quiet night were disrupted by nosey neighbours Colin (Jonathan Watson) and Cathy (Doon Mackichan). The laughter flowed from the pin-sharp portrayal of everyday life. Two Doors Down coasted along on a script that was gently droll rather than madly hilarious – and which specialised in old-school toilet humour. But care was taken not to look down on the characters or suggest suburban life was some sort of beige hell.”
Ed Power, The i

“It was a lovely, illuminating hour in which Frank Skinner and his co-presenter, the crime writer Denise Mina, proved that discussing poetry need not involve airy-fairy pretentiousness. Although the punters sitting in the pubs they visited, frequently whipping out their tomes to quote aloud from verse, felt differently.”
Carol Midgley, The Times