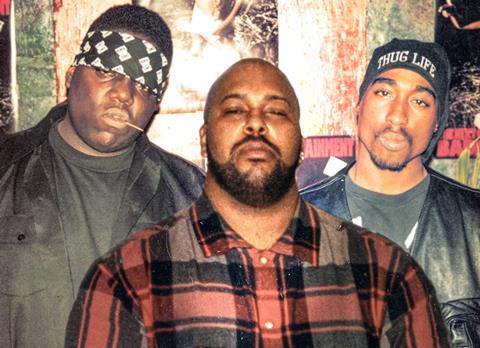 “Amid a bleakly compelling film, the climactic scene of Nick Broomfield’s Biggie and Tupac, released in 2002, was particularly memorable. Mostly for the palpable air of menace exuded by the hulking hip-hop magnate Suge Knight as he prepared to sit down with the mildly flustered documentary-maker. Particularly because Knight – who had been head of Tupac’s record label, Death Row Records, and was accused of being involved in the murder of at least one of the rappers – was in prison at the time and guards were nearby. What could he possibly do? And yet his charisma and presence were potent.”
Phil Harrison, The Guardian

“A depressing tale of depressing people doing depressing things to other people including murder, all allegedly with the collusion of the LAPD, which was the most depressing thing of all. [Nick] Broomfield had put the graft in and earned people’s trust, which can’t have been easy because some of the protagonists had been involved in the gangs of Los Angeles. It was also poignant that he dedicated the film to the late LA cop Russell Poole, who exposed corruption within the force and was pushed into early retirement. However, I’m not sure it took us anywhere fresh enough to warrant 100 more minutes and it did feel a little repetitive.”
Carol Midgley, The Times

“Some commenters have lost patience with Vigil in the past fortnight, frustrated by its narrative contrivances and labyrinthine twists. This penultimate instalment, to my mind, represented a return to form. The conspiracy plot came into sharper focus and felt pleasingly old school. The crew came together to fight the new threat. With Silva back in her investigative element on the sub and Longacre rampaging around on land, it had pace, purpose and driving momentum. The dive-suit sequence brought to mind Chernobyl or even The Salisbury Poisonings – with a dollop of sci-fi space drama for good measure. It was all left tantalisingly poised and hopefully won back a few doubters.”
Michael Hogan, The Guardian

“This was a sad, labyrinthine story about pornography, sexual shame and exploitation that went four times round the houses incorporating something silly about the way the murderer left the hands of a clock. I’m still not entirely sure why it needed a nudist hotel, except that it facilitated Jim Strange saying: “I’m not here to frolic in the altogether.””
Carol Midgley, The Times

“There was a genuine sense of occasion around the episode as Strictly welcomed a live studio audience and band. That was in contrast to the 2020 launch, which unfolded in the shadow of the pandemic and strict Covid protocols. So it was understandable that a certain giddiness was in the air as the latest crop of actors, comedians, sports stars and internet personalities aimed to follow in the deft foot-steps of 2020 champion Bill Bailey.”
Ed Power, Telegraph