“I love an ITV thriller as much as the next person, but this slides into the ranks of them, rather than elevating itself above” 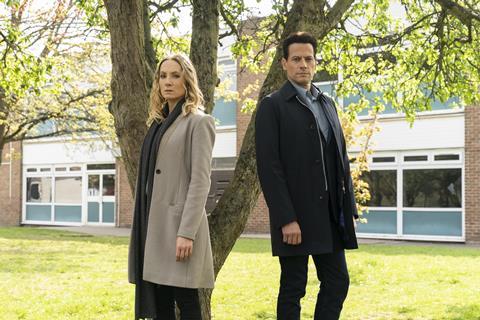 “By establishing potential murderers all over town, if not the county, it is reaching for a Broadchurchy feel. It’s all just a bit too cartoonish to pull it off, though. I love an ITV thriller as much as the next person, but this slides into the ranks of them, rather than elevating itself above.”
Rebecca Nicholson, The Guardian

“This felt like the sequel the Williams brothers never expected to write, an afterthought tacked on and cobbled together despite the inconvenient fact that its main character — the titular ‘liar’ — is dead. Apart from Laura I am not interested in a single character that we are left with.”
Carol Midgley, The Times

“As whodunits go, at least the answer isn’t obvious. Really though, do we care who did it? Joanna Froggatt is required to give a performance so miserable and one-note – furrowed brow, trembling voice – that Katherine Kelly’s tough-talking, nicotine gum-chomping DI Karen Renton comes as welcome light relief.”
Anita Singh, The Telegraph

“The brothers favour brooding cinematography and music combined with soapy storylines. This approach felt uncomfortable when applied to a rape allegation in series one. But this mode of storytelling does a much better job of showing the spreading ripples of Andrew’s crimes, and how his multiple victims’ lives have been affected.”
Barbara Speed, The i

“The only pity is that we’ve had to wait so long to learn the secrets of Liar. This was such a complex story, with so many flashbacks, that keeping track of it all was hard enough at the time. A two-and-a-half year gap makes it almost impossible to remember all the subtleties of the first series.”
Christopher Stevens, Daily Mail

Age of the Image, BBC4

“Age of the Image sounded as if it might be another trot down the well-trodden ‘why oh why is everyone obsessed with selfies?’ path, but it was far more interesting than that. Dr James Fox took us on a compelling journey through the history of the photographic image that was never afraid to be intellectual. The sections on Buster Keaton and Salvador Dalí’s The Persistence of Memory were excellent.”
Carol Midgley, The Times

“Dr Fox traced the birth of candid photography through Kodak’s Brownie camera, the development of the X-ray, Thomas Edison’s creation of video camera technology, Einstein’s theory of relativity. War photography, surrealism, still life and futurist sculpture were all chucked in too. We were left with a hodgepodge of the bits of 19th century he found most interesting. The programme has bitten off a little more than it can chew.”
Barbara Speed, The i

“James had reels of fascinating film facts to share as he traced the modern era’s obsession with the face in photographs, from the first movies to today’s glut of selfies.”
Christopher Stevens, Daily Mail

“The programme has been given something of an eco-makeover but otherwise it has stayed pretty much the same. But something felt undercooked, and it wasn’t just the food. The original Ready Steady Cook poked fun at itself; despite Rylan’s best efforts, this new incarnation lacks the necessary zing.”
Anita Singh, The Telegraph