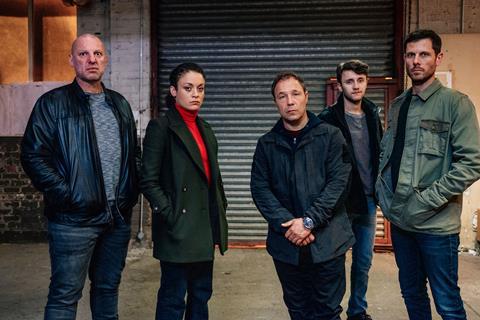 “It’s ridiculous, unbearably tense and instantly addictive. As ever, nothing is wasted; not a scene, not a line, not a beat. It fits together flawlessly – you can imagine Mercurio sitting like a watchmaker at his table with the parts spread before him and fitting the loupe to his eye before assembling the whole thing and listening for its perfectly regulated tick.”
Lucy Mangan, The Guardian

“The fifth series opened with ambush, betrayal, panic, and murder: a giddily exciting assault on the nerves. The final five minutes were superb.”
Sarah Carson, The i

“The series will probably be yet another gripper, though compared to previous Line of Duty runs, it has a higher bar to clear. The other Mercurio scripts it is in competition with now includes Bodyguard. Against all those lordly Whitehall interiors and big-spending explosions, Line of Duty’s canvas risks looking slightly off-the-peg.”
Jasper Rees, The Telegraph

“Yes, some of it is silly and corny, and Ted Hastings (Adrian Dunbar) is still saying comically expositional lines. But it is a dependable, wily machine, superior in my view to Mercurio’s other baby, Bodyguard.”
Carol Midgley, The Times

“This was a lovely Attenborough because of the bizarreness of the cast, especially the albino wallabies and the brilliant Tasmanian platypus, which looked like the result of a game of heads, bodies and legs, where children draw different body parts on a folded piece of paper.”
Carol Midgley, The Times

“If anyone but Sir David told you about the platypus, you might not believe them. His authority is unquestioned, however, which is why so many film-makers clamour to work with him.”
Christopher Stevens, Daily Mail

“This was a reminder that Sir David isn’t ready for retirement yet. There’s still no one better at combining the personae of favourite teacher and spellbinding storyteller. As he described the magnificent landscapes and fascinating wildlife it was clear that, at 92, he remains as fascinated by the natural world as ever.”
Jeff Robson, The i

“Now in her third series, Jenna Coleman is completely confident in her portrayal of Victoria, conveying emotions with the subtlest changes of expression.”
Christopher Stevens, Daily Mail

“It was, of course, a time of Europe-wide revolution and political foment. And the government really did dispatch Queen Victoria to the Isle of Wight for her own safety. But it is a broad stretch of the imagination that she ever intervened at the 11th hour on the side of the Chartists.”
Gerard O’Donovan, The Telegraph