Line Of Duty; This Time with Alan Partridge; The Great Garden Revolution; How to Save a Grand in 24 Hours; Stacey Dooley Sleeps Over

“To tie up a story this complex, leaving no loose ends, is a superb achievement” 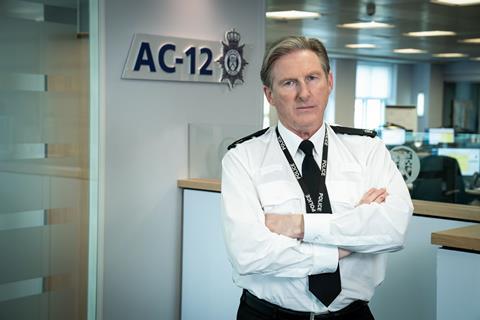 “The BBC will be desperate for Mercurio to come back with a seventh series but this felt like the right place to end it. I’ve griped about various bits of this show over the years but it stands head and shoulders above most other dramas. It has kept us guessing and kept us talking. And it’s clever. To tie up a story this complex, leaving no loose ends, is a superb achievement.”
Anita Singh, The Telegraph

“The revelation turned what should have been a tyre-screeching climactic episode into something of a slow puncture. But if this wasn’t the great last episode we’d hoped for, then the show as a whole has achieved what is a very rare feat indeed for a TV drama these days – it has become a collective experience.”
Gerard Gilbert, The i

“There have been in this season some plot holes that belied Mercurio’s reputation for watertight narratives and, a handful of set pieces aside, an almighty lack of … actual police work. This odd weighting of action against inertia has been a growing problem that became all but unignorable. It was all fine. But, oh my, you should have seen it when it was good.”
Lucy Mangan, The Guardian

“The return of This Time with Alan Partridge was exactly as it should be: ghastly. If it’s occasionally unnerving how true to life this spoof One Show is, there is no doubt that it’s the perfect vehicle for Alan’s brand of misguided grandiosity.”
Rachael Sigee, The i

“It is perhaps a slightly coarser, less exquisite agony than in his absolute prime but agony it truly remains. Such is the ongoing mastery of his creation that I flinch from the pain even as I remember the laughs. Even if he doesn’t soar quite as high or as often as he once did, Coogan/Partridge remains the best of comedy and the worst of us.”
Lucy Mangan, The Guardian

“The writing, by brothers Neil and Rob Gibbons plus Coogan, exquisitely sends up the banality of programmes like The One Show. The supporting players are a hoot. There is much to love, but Coogan turns out to be the least funny thing here when isolated from the rest of the cast. If the action moves away from the awkward studio exchanges to the outside broadcasts, the show falls a bit flat.”
Anita Singh, The Telegraph

“It sounds a bit hipsterish. But it turned out to be a refreshing addition to the genre. Presenters Poppy Okotcha and Joel Bird, aided by craftsman Bruce Kenneth, do a great job of explaining the basics and giving amateurs the confidence to tackle everything from growing vegetables to creating a pond. Okotcha in particular has a lovely, soothing way of making gardening sound accessible and undaunting.”
Anita Singh, The Telegraph

“Lots of the advice was obvious and nothing we haven’t heard from Martin Lewis. The programme’s aim was a noble one and there were some genuinely helpful nuggets. But in terms of giving revolutionary tips it was a bit of a dud.”
Emily Baker, The i

“Dooley rather fancies herself in the Louis Theroux role: baffled, wise observer to extraordinary goings-on. The problem with the couple’s arrangement was that it wasn’t quite weird enough. Stacey clearly expected more from her weekend sleepover, especially given Lillian’s outlandish social media proclamations, and was let down by the reality of what she found.”
Ben Dowell, The Times