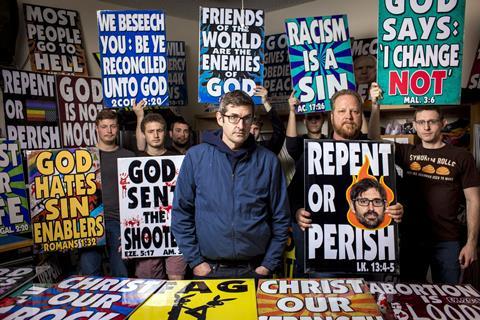 “Follow-up documentaries rarely have the impact of the first, and Louis Theroux: Surviving America’s Most Hated Family certainly had the feel of the beta sequel. Some might question whether the Westboro Baptist Church in Kansas is worthy of a third visit, given that it seems to comprise a few sad, deluded, deranged Bible-bashers who are petrified of real life.”
Carol Midgely, The Times

“It’s not often one thinks of Louis Theroux and the word ‘dull’ in the same sentence. But last night’s Louis Theroux: Surviving America’s Most Hated Family was deathly dull and felt like a misstep by this much-loved documentary maker. The issue was that there was really nothing new here. In two previous films Theroux had already highlighted the abhorrent hate-speech espoused by these raving religious fanatics.”
Gerard O’Donovan, The Telegraph

“Theroux stood his ground to an admirable degree with the noxious family. Less admirable is Theroux’s treatment of Megan (who escaped the church a few years ago). He reduces her to tears – as he must surely have known he would – with the news that two of her siblings recently became engaged. It was profoundly uncomfortable to watch and, for me, errs firmly on the side of exploitation – which is not, generally, Theroux’s stock-in-trade.”
Lucy Mangan, The Guardian

“Occasionally Theroux’s faux naif approach and habit of springing grim revelations of their siblings’ inter-group engagements to the ex-members on camera felt a little manipulative. He was at his best when dropping his neutral mask and calmly confronting Drain and the other cult members, skewering their attempts to rebrand the church’s toxic message.”
Jeff Robson, The i

“Louis’s awkward charm was deployed to its full effect on Surviving America’s Most Hated Family, as he paid a third visit to the hell-fieriest, most brimstoney religious splinter group in America’s Bible Belt. But the flaw with this documentary was he needed another 30 minutes to do the subject justice.”
Christopher Stevens, Daily Mail

“Writer Debbie Horsfield has taken Ross’s already considerable hero credentials and upped them. No shortage of action in this opener, which tackled the abolition of slavery, Drake’s still sexless marriage (yawn), and unrest among the Cornish locals headed by sulky Tess.”
Carol Midgely, The Times

“As ever, Debbie Horsfield’s superb script plunged us instantly into a world of tricorne hats, swoonsome Cornish coastlines and strangely heightened emotions. All in all, a thoroughly enjoyable start to what’s almost certain to be an emotionally draining but hugely entertaining final run.”
Gerard O’Donovan, The Telegraph

“A pacy, multi-stranded narrative. Sharp dialogue that stays just the right side of self-parody. A rich array of supporting turns. And a charismatic hero and heroine played by actors with a genuine on-screen chemistry. All that was present and correct in the series opener.
Jeff Robson, The i