“This was an hour with few fireworks, yet still thoughtful and surreptitiously profound.” 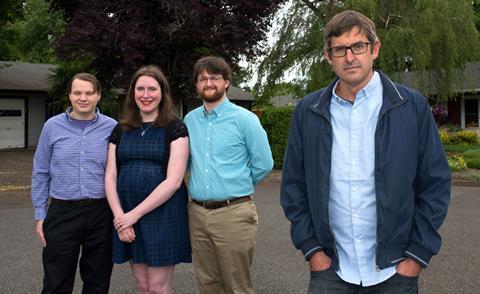 “Theroux, as ever, treads his tightrope without a wobble. He asks just enough and just hard-enough questions to challenge his interviewees and force them (and us) to think, without alienating them, and hangs back enough to let the answers’ openness or person’s defensiveness, body language, pauses and silences say at least as much again.”
Lucy Mangan, The Guardian

“Throughout, Theroux maintained his British reserve, bemusement and startling ability not to pass judgement, his brow all but furrowing back into his skull as he stripped down to his smalls for a ‘blindfolded sensual dinner’. This was an hour with few fireworks, yet still thoughtful and surreptitiously profound.”
Gerard O’Donovan, The Telegraph

“I’m not convinced everyone was a true believer in ‘consensual, ethical non-monogamy’. With Gretchen it felt more as if she were simply glad of the break from shagging her husband, Joe. But she was the most intelligent and, I think, honest interviewee in this documentary, in which we saw Theroux at his light-touch, deadpan best.”
Carol Midgley, The Times

“Compared to last year’s Dark States – where he elicited telling testimony on gun crime, sex trafficking and opioid addiction in the US precisely by letting the interviewees speak for themselves – and the acclaimed documentary Talking to Anorexia, it all seemed unusually prurient and judgemental.”
Jeff Robson, The i

“Without once passing judgment, Theroux explores the slowly unfolding tragedies in his interviewees’ lives. They seemed to go to a lot of trouble to be that unhappy.”
Christopher Stevens, Daily Mail

“The Little Drummer Girl was still in third gear last night and I’m struggling to believe that Israel’s security services would risk recruiting a ‘radical’, slightly flaky suburban actress to infiltrate a Palestinian terror cell. Or that she’d go along with it so readily. There must be simpler counterterrorism methods than hiring a faintly irritating luvvie. But I am, despite that, enjoying it.”
Carol Midgley, The Times

“Zooms and pans were outrageous, the sets often strikingly stagey and the soundtrack Bernard Hermann-esque. Such auteurist flourishes aren’t often seen on television these days, but the fine character work ensured that they didn’t distract from the story. Languid, tense and elliptical, The Little Drummer Girl is as seductive as the late-Seventies fetishism in which it wallows.”
Gerard O’Donovan, The Telegraph

“This episode had something missing from last week’s opener — zippy dialogue. We were also treated to some of the glamour that fans of The Night Manager, BBC1’s previous Le Carré adaptation, adored. The pace sometimes sputtered, but the sheer complexity is engrossing.”
Christopher Stevens, Daily Mail