Man vs Bee; Taskmaster; Who Do You Think You Are?; Loot

“Rowan Atkinson has lost none of his skill and you will watch it quite happily, but it just lacks the genius of Mr Bean” 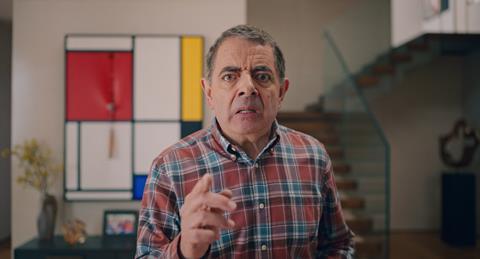 “Man vs Bee replaces Nicolas Cage’s The Wicker Man retool as my favourite bee comedy. I’ve always felt, I now realise wrongly, that Atkinson’s best comedy was verbal and that Mr Bean and Johnny English were chiefly of interest to the lucrative dimwit demographic. I’d have given this series five stars but for two things. First, the bee is woefully undercharacterised. What is its motivation? Second, product placement is unremitting.”
Stuart Jeffries, The Guardian

“In the same way we know that Charlie Brown will never kick that football, the humiliating hurt is writ in Trevor’s stares, the jeopardy resting only in wondering how he will get there. Is it a fun journey? Not especially. While Atkinson’s performance is as commandingly skilful as you would expect, at times it is about as much fun as a boot stamping on a human face for ever, to borrow from George Orwell. And it’s certainly not enjoyable in the same way watching Mr Bean screw things up can be.”
Ben Dowell, The Times

“Atkinson has lost none of his skill and you will watch it quite happily, but it just lacks the genius of Mr Bean. The set pieces are almost too perfect, with slick production and the feeling that everything has been precision-tooled to deliver a satisfying customer experience. Don’t be surprised if it becomes an enormous international hit.”
Anita Singh, The Telegraph

“The fantastical plots and twists work surprisingly well in the end, after all the Beanery. The only glaring flaws are that Trevor and Jess seem much too nice to be divorced, and I refuse to believe that bumblebees like peanut butter (the premise of Bingley’s frantic attempts to trap it). As you’d expect from a Netflix production, it’s smartly produced and directed, and Atkinson as Bingley is much more engaging than Bean, and is still game enough to spend much of his time on screen in his underpants.”
Sean O’Grady, The Independent

“The celebrities try hard to please in these tasks of spectacular pointlessness, but to me the bulk of the humour is always in the interaction between Greg Davies and ’Little’ Alex Horne and I rather wish the tasks didn’t last so long. Its main achievement has been to find a new way to make a comedy panel show that isn’t smug and turgid but is instead audaciously, fabulously stupid.”
Carol Midgley, The Times

“Can there be any show on telly that is more wonderfully, joyfully pointless than Taskmaster? This is the magic of Taskmaster. It has no message to deliver and it does not take itself seriously — it’s just a group of comedians doing very silly tasks for no other reason than to make us laugh. How excellently old-fashioned.”
Roland White, Daily Mail

“This week’s episode was an example of how this show can get it right. There were no striking coincidences or cor blimey moments in Maxwell Martin’s story. Instead, it was a thoughtful exploration of how children do not have to repeat the mistakes of their parents; and how it is possible to forge a happy life despite being brought up in miserable circumstances.”
Anita Singh, The Telegraph

“Though it is initially dressed up as a satire of the ultra-rich, the writers are smart enough to realise that this is low-hanging fruit, and what it actually turns out to be is a sweet ensemble workplace comedy. It has a game sense of humour but it also hits the right notes when it comes to the feelgood stuff. Is it a bit preachy? Kind of. Does it hedge its bets? Often. But by the end of the series it has done enough to make you care about its characters.”
Rebecca Nicholson, The Guardian