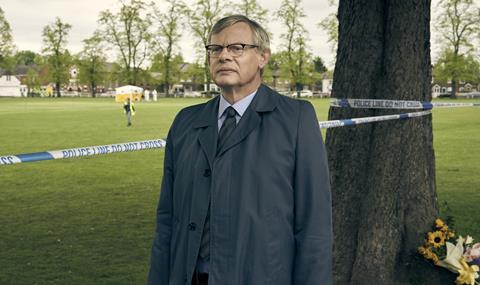 “This sober, responsible production has managed to avoid the temptation of hyping it as Martin Clunes’s first foray into straight drama and aggrandising him or the production at the victims’ expense. Clunes does fine work as an utterly ordinary detective finding himself in charge of an utterly extraordinary investigation.”
Lucy Mangan, The Guardian

“It takes a very good actor to make a real, do-it-by-the-book detective, who isn’t a hard drinker and doesn’t shoot from the hip, come alive on screen. I still think it’s too soon, but it is in responsible hands.”
Carol Midgley, The Times

“Manhunt didn’t have the emotional heft or powerhouse performances of its ITV true crime stablemate Little Boy Blue. However, it was no less compelling for it. Even though we know the outcome, I found myself rooting for Sutton and his team. I’ll be glued over the next two nights as the net closes in.”
Michael Hogan, The Telegraph

“This seemed to me a sober and responsible attempt to tell a true story of good police work making connections and getting results which probably saved lives. While the pace may have dragged at times, and there was the odd line of stilted dialogue, at its best moments this was another ITV crime drama of the highest order.”
Jeff Robson, The i

“Manhunt is a faithfully accurate dramatisation, with a solid central performance from one of the country’s most popular actors. This is a realistic glimpse into actual policing, where originality counts a good deal less than persistence.”
Christopher Stevens, Daily Mail

“In this second episode of Andrew Davies’s adaptation it was the women who shone most, Lily Collins and the ever pitch-perfect Olivia Colman as Madame Thénardier who brought, if not laughs, slight release from the unrelenting misery. Good though, isn’t it?”
Carol Midgley, The Times

“Fantine’s desperate plunge into street prostitution was both a tale as old as time, and fresh as this morning’s newsprint. Brief glimpses of the two Thénardiers whetted the appetite for further grotesquerie from Colman and Adeel Akhtar, though with four episodes still to go I’m already gagging for a comeuppance.”
Jasper Rees, The Telegraph

“Lily Collins was so joyless, so utterly crushed, that it was a mercy whenever the story cut back to Olivia Colman as the despicable Mme Thenardier —who robbed, cheated, wheedled and lied while forcing orphans to scrub her floors, but at least managed a smile occasionally. This was a weary hour of grey rooms, bitter poverty, moonless nights and damp dawns. Roll on springtime.”
Christopher Stevens, Daily Mail

“Even though some of the elements of the set-up didn’t work, The Greatest Dancer was still hugely likeable, mainly thanks to the infectious presence of Oti Mabuse and the life-enhancing power of dance.”
Michael Hogan, The Telegraph