“It was a treat just to see Palin back in travel mode for the first time in years.” 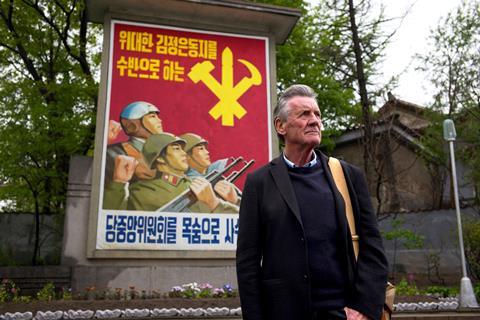 “I can’t think of a travel documentary I’ve enjoyed more than this, recently. Apart from the quirks and conundrums of the last truly bizarre place on Earth, it was a treat just to see Palin back in travel mode for the first time in years.”
Gerard O’Donovan, The Telegraph

“Obviously, he and his crew were supervised at all times by suited heavies and he was only shown North Korea’s comely side. But even knowing it was propaganda-heavy, how much more culturally nourishing was this than watching some former soap star gurning around Asia?”
Carol Midgley, The Times

“With such a watchful eye on him, Palin was limited when filming and had to save the more scathing commentary for the voiceover. Despite the restrictions, he was still able to deliver an intribuing and good-humoured programme.”
Claudia Connell, Daily Mail

“Palin, who last packed his suitcase for 2012’s trip to Brazil, is a master of the travelogue - combine that with this never-before-seen destination and this is must-see TV.”
Fiona Price, Daily Express

“ITV has clearly decided to squeeze its soap operas until the pips squeak. Recently we had a sort of Who Do You Think You Are? for Coronation Street and now we had Emmerdale 1918 — the First World War through the prism of Emmerdale. It was better than it sounds. Thanks to a soldier called Fred Brocklehurst, who was a cook in the trenches and kept a splendid photo album, it brought to life what we may have forgotten.”
Carol Midgley, The Times

“If Emmerdale 1918 lacked sophistication, it had a good heart. And commemorating the sacrifices of those caught up in the First World War can only be a good thing.”
Gerard O’Donovan, The Telegraph

“With soaps pulling in the biggest audiences, it makes sense for ITV to have its stars fronting documentaries that may otherwise go unwatched. And, as last night’s programme showed, it works very well.”
Claudia Connell

“Maniac starts off cheerfully deranged and then ratchets up the bonkers factor. The miracle is that it parlays the eccentricity into one of the year’s most affecting and gripping dramas.”
Ed Power, The Telegraph

“It is off-kilter, surreal, intriguing and moving. It also has a whimsical streak working throughout that leavens it all, leaving it closer to a warm Westworld than a cold Good Place or chilly Kimmy Schmidt.”
Lucy Mangan, The Guardian