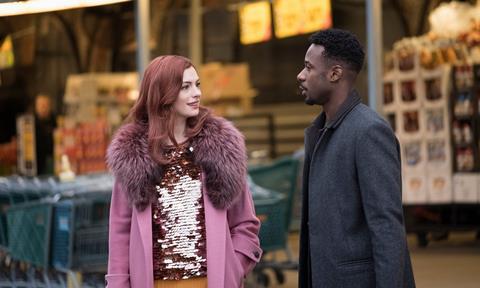 “Modern Love continues the streaming giant’s run of so-so dramas that can’t quite break new ground. This should be a surefire success. It’s A-list and painfully classy, but over eight episodes it only rarely lifts off, and instead settles into an oddly bland, will-this-do middle ground.”
Rebecca Nicholson, The Guardian

“Alas, John Carney’s series mutes the rich diversity of those experiences to one long, neutral-toned lifestyle advertisement designed to flatter New York Times readers and Amazon Prime viewers. It was all so absurdly perfect I found myself hoping for a second series in which their palatial homes were all repossessed, forcing them to take jobs working under striplighting in an Amazon packing warehouse.”
Helen Brown, The Telegraph

“It is unashamedly saccharine, and its whimsical soundtrack is ideally suited to a filmic, fictional Manhattan where New Yorkers do not merely walk along pavements but trip the light fantastic, poised to burst into song. But its stories are thoughtful, diverse, and stray from the well-trodden Central Park path. It is a welcome jolt to see true, varied romances cast against the familiar romcom backdrop of twinkling chimes and gilt.”
Sarah Carson, The i

“Looking for Alaska is a curious addition to the teen TV canon, oddly wholesome and fixed in its 2005 setting. This is Dawson’s Creek with regular alcohol; The OC in Alabama. For people who grew up on those shows, the nostalgia element is strong. Whether it can win over a new, young audience remains to be seen.”
Rebecca Nicholson, The Guardian

“The problem is not so much that teenagers cannot be this unbearably conceited (which, I suppose, they can), but that we are supposed to side with them and be amused by them. The script is often no more self-aware than its characters. This is a TV show that brings The Bell Jar to a house party and won’t shut up about the plastic bag scene in American Beauty. It is, by and large, insufferable.”
Louis Chilton, The i

“Their trip down the waterway that first seduced them 40 years ago, the Oxford Canal, was not their most eventful, but it was definitely their most poignant, seasoned with flashbacks to previous series and featuring their children and grandchildren, who produced a themed cake, as if to mark their goodbye. It was lovely and unbearably sad.”
Carol Midgley, The Times

“This was an even gentler treat than BBC2 Mortimer & Whitehouse: Gone Fishing, if you can imagine something so soothing. Flashbacks to previous favourite journeys added to the elegiac feel. If this is to be the pair’s last series, they have done themselves proud – but I hope we meet again.”
Michael Hogan, The Telegraph

“It was proof that you can make a great programme – and several series of them – from ingredients as simple as lovely scenery and a gentle couple enjoying each other’s company.”
Jeff Robson, The i

“Meghan was the star of this film, seeming to dominate joint engagements, her actress training manifest as she held the camera and did not hurry her words. There are those who, bizarrely, think being rich and famous forfeits any sympathy. But both Meghan and Harry presented as normal, vulnerable humans. If this was a PR gamble I think, on balance, it is one they have won.”
Carol Midgley, The Times

“There are some blockbuster-worthy action sequences that are tense, well-choreographed, and visually striking, but it’s the well-judged character moments, particularly with [Regina] King which means we are invested with the drama going ahead.”
Lewis Knight, The Mirror

“World on Fire hasn’t grabbed everyone and I can see why. There are eight busy strands playing out, thus much chopping and changing. Some plot lines could do with more time and others less. But when it works it really works.”
Carol Midgley, The Times

“The script was heavy-handed at times and one inevitably finds oneself more emotionally engaged with some plot-lines than others. However, as Sunday night dramas go, World on Fire is an old-fashioned crowd-pleaser with huge heart.”
Michael Hogan, The Telegraph