“Unabashedly grand and irresistible in its demented excess” 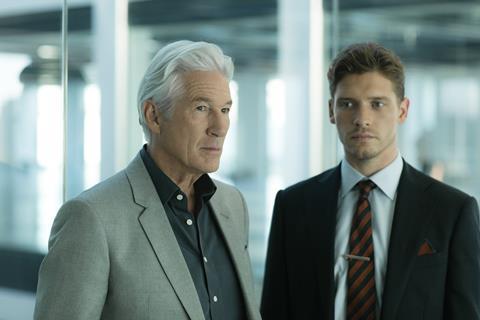 “On paper, it smacks of quality and potential. What I didn’t see coming was the extent to which it is, beneath its theatre royalty and expensive suits, completely and utterly cuckoo. And yet, for all of its ridiculousness, I enjoyed MotherFatherSon enormously. It is unabashedly grand and irresistible in its demented excess.”
Rebecca Nicholson, The Guardian

“The plot was unwieldy with a lot of sub-strands and didn’t much grab me in this first episode, which had a lot of ground to cover. But my advice is — stick with it because next week it gets much better.”
Carol Midgley, The Times

“It’s slick and gloomy and there’s a sense of threat that surrounds Gere’s Max, the loathsome patriarch dabbling in the upper echelons of politics ahead of an election. But this is over complicated by lank subplots that fail to entice, and is too smugly ambitious for its own good.”
Sarah Carson, The i

“Gere, whose workaholic billionaire looks surprisingly tanned and relaxed for a man with an evil global empire to run, patently believes he is making Great And Serious Television. Actually, he’s in a big-budget family soap with atrocious dialogue, and we all know the official name for that: Dynasty.”
Christopher Stevens, Daily Mail

“Richard Gere and Helen McCrory are of course impeccable. Their ongoing task is to persuade you to believe in these speechifying icicles. I really want to buy in, but confess I don’t currently mind if Caden lives or dies.”
Jasper Rees, The Telegraph

“Whatever the truth, as a documentary it is an astonishing piece of work. Relentlessly spare and unsensationalist, it manages better than any other in its genre not to let its attention wander from the survivors’ testimony.”
Lucy Mangan, The Guardian

“It was like having front row seats for a slow car crash: the practised seduction and plausibility, the drills to dress quickly if someone came, their genuine sense of rejection when they were sidelined for younger boys rang true. Director Dan Reed did not over-egg the material and just let the witnesses speak.”
Carol Midgley, The Times

“Part One, with no aftermath to consider quite yet, came at us like a slow-motion gut punch – crude and a little artless, but winding in its impact. Peppering his account with grim humour, Safechuck is a more devastating witness for the prosecution than any Jackson faced in his lifetime.”
Tim Robey, The Telegraph

“The documentary is not perfect and will surely be remembered as the final nail in Jackson’s coffin rather than a landmark piece of filmmaking. And it is one-sided. But after watching this, a grim portrait of paedophilia and how the effects of abuse linger to destroy lives decades later, for many there will be no need to hear another side.”
Sarah Carson, The i