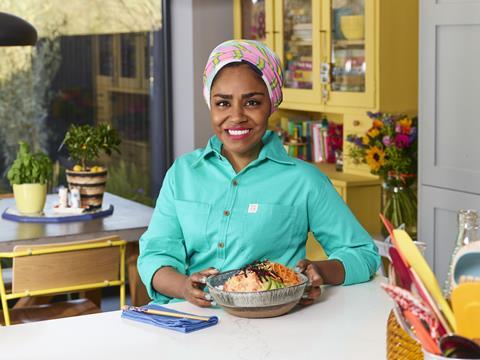 “It works because it is not about food or time-saving at all. It is about putting our feet up for half an hour, basking in Nadiya’s radiant charm.”
Lucy Mangan, The Guardian

“I do very much like the tone of her programme, which is unpretentious, modest and, unlike with some TV cooks, doesn’t assume that ordinary people have pantries full of exotic syrups and rare spices and offers recipes for knackered working people that are ‘full of cheats’.”
Carol Midgley, The Times

“Nadiya may have started her career with baking but it is clear with every new series that she is the natural heir to Nigella Lawson and Jamie Oliver – right down to the bokeh family meal shots and the Motown soundtrack. She charms everyone she meets and the audience throughout, and glows with warmth on camera.”
Sarah Carson, The i

“Since Nadiya only has half an hour, it feels as if she’s trying to cram in far too much … as usual. Time To Eat would work best if she stuck to the fast-and-tasty recipes — such as her DIY Pot Noodles.”
Christopher Stephens, Daily Mail

“This was an expansive, cerebral documentary for which the BBC did not spare the air tickets, sending not two, not three, but four presenters to various parts of the US. The amount of detail was mind-boggling; no one could have taken in all the facts and figures flying about.”
Carol Midgley, The Times

“I had feared it might be tediously sciencey but instead, as Professor Brian Cox and Dara O’Briain reported from Florida (and their colleagues Dr Hannah Fry and Dr Kevin Fong from California, Texas, and beyond) it appealed entirely to a sort of primal fascination, answering questions that boggle us, whatever our age. This was a bumper show, and the completely joyous thing about every expert was the excitement they still possessed about their subject.”
Sarah Carson, The i

“When it comes to enthusiasm for the stratosphere, with these two the sky’s the limit. Ó Briain specialises in rocket-propelled cheerleading while wide-eyed Cox thrusts his hands in his pockets as if to assist gravity in keeping him just about grounded. You finished this primer slack-jawed in awe at the mindboggling ingenuity of man.”
Jasper Rees, The Telegraph