“When everyone stops trying so hard and the series settles down a bit, it might prove as entertaining as the original” 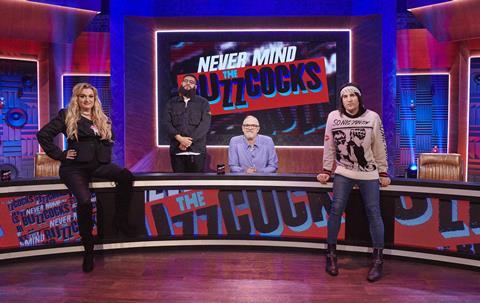 “This reboot working so well must be declared a small victory. Panel shows can so easily be done wrong — have you witnessed the latest incarnation of A Question of Sport? — but this first episode was suitably riotous as Davies was joined by the new regulars, Daisy May Cooper (of This Country) and the more deadpan Jamali Maddix. And it just about pulled off the difficult trick of keeping up the “Did he just say that?” remarks without scaring the PC horses.”
James Jackson, The Times

“When everyone stops trying so hard and the series settles down a bit, it might prove as entertaining as the original. Perhaps the producers should fuel the free-wheeling fun by filling the mugs on the desks with booze, like legend has it used to be the case. For now, though, this was a solid but self-congratulatory comeback.”
Michael Hogan, Telegraph

“The revived pop quiz risks falling between two demographic stools: the kids who regard anything before Stormzy’s Glastonbury set as ancient history, and the old farts who aren’t sure if Arlo Parks won the Mercury prize or is the last stop on the Piccadilly line. Trying to bridge that divide is like getting me to watch Love Island. A lot rides on new host Greg Davies and team captains Daisy May Cooper and Noel Fielding, though they seem less representative of diverse Britain (if more relatable and brainy) than Boris Johnson’s cabinet.”
Stuart Jeffries, The Guardian

“Laughing cruelly at other people has rather gone out of fashion, yet nobody seems to have mentioned this to the Buzzcocks. They still did the Let’s Poke Fun At Old People round (please note: not its actual name) where the panel has to identify an ageing rocker from a line-up. One of last night’s line-ups featured Bucks Fizz, who are still fairly recognisable. Cheryl Baker has hardly changed a bit.”
Roland White, Daily Mail

“As new Never Mind the Buzzcocks quizmaster Greg Davies pointed out early on in his brisk, enjoyable debut, humanity has fallen to pieces ever so slightly since the show was cancelled by the BBC in 2015. The Greek debt crisis, Donald Trump in the White House, a pandemic. Would any of these disasters have occurred had the caustic pop panel revue remained on the air, he wondered? But now Sky was bringing back Buzzcocks and all was well again. “Get ready to heal, world!” he declared. The gag was funny, absurdist and had the quality of something you might hear down the pub – which encapsulated the charms of Buzzcocks’ boisterous take on the Have I Got News For You formula. This was a reinvention rather than a remix. And it was mercifully free of the gratuitous nastiness for which “classic” Buzzcocks was all too often given a free pass.”
Ed Power, The i

“Perhaps it was because our collective mood was low last September, but the 2020 series of Bake Off didn’t quite hit the comforting spot. Have we, as a nation, been through too much to enjoy watching a group of bakers panic over melting buttercream? Thankfully, the answer is a resounding no: watching last night’s opening episode of series 12, it took all five seconds for a big grin to spread across my face.”
Emily Baker, The i

“At their height there really did appear to be strength in numbers — together the Spices were able to deal with the pressure and the criticism. No wonder post-Spice Geri admitted at one point: ‘I feel really lonely.’ In the end, this was just another programme about the effect of fame and what it’s like to be constantly in the public eye. Frankly, it looks awful.”
Roland White, Daily Mail