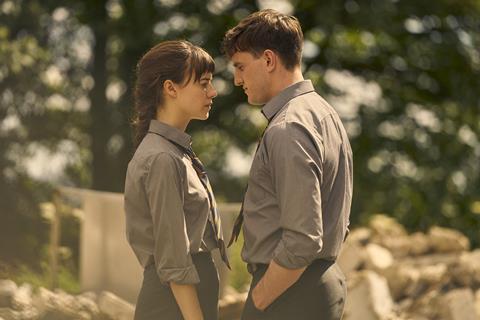 “The rendering of the on-again-off-again relationship between sixth-form and then university students Marianne and Connell for the small screen, by Rooney herself with Alice Birch, is near-perfect from whichever direction you come at it. The show retains the pared-down approach of the book. The pair’s bond remains the sole concern, but various factors mitigate any possible tedium.”
Lucy Mangan, The Guardian

“I can say this without hesitation: this is one of those very rare occasions when the screen version thrashes the book. It is a beautiful piece of work capturing the fervid intensity of a first teenage sexual relationship with charm and poignancy. This is almost entirely due to the quality of the two lead actors, although the lean dialogue helps too.”
Carol Midgley, The Times

“For a novel whose first quarter documents its protagonists’ school days, TV adaptation was a risk. With the wrong actors and a clunky script, it might have descended into the sort of high-school romcom, whoever it was at the BBC or Element Pictures that persuaded Rooney to come on-board as a writer deserves a raise. The understated realism of the script, which preserves much of the 2018 novel’s original dialogue, steers us deftly away from cheerleader cheese.”
Susannah Goldsbrough, The Telegraph

“The drama is elegant and sparse: long, gloomy sweeps of the Irish coast, shady corners of Marianne’s vast, uncomfortable mansion and claustrophobic car journeys. The pace is feverish: time seems to speed up around Marianne and Connell when they’re alone, until all those unspoken rules that govern human behaviour – passion, class, haste, regret – derail them.”
Sarah Carson, The i

“This is at the playful end of the natural history spectrum, with Chris Packham arching one eyebrow during the narration, and the music regularly journeying towards jaunty. Nature-watchers raised on David Attenborough shows with Planet in the title don’t get the familiar hushed barrage of unbelievably epic sequences.”
Jack Seale, The Guardian

“The BBC’s latest natural history series has fabulous footage and incredible access and interesting insights into animal behaviour. What it doesn’t have is Sir David Attenborough. It’s an absence keenly felt. Primates has Chris Packham, who is fine, but doesn’t make for event television.”
Anita Singh, The Telegraph

“It is all quite glum - the writer, Chris Murray, has Midsomer Murders on his CV, but this is a million miles away in tone - and I don’t expect Van Der Valk to crack a smile before the series is out. But by the end of this feature-length opener I found myself warming to him. Even over a feature-length running time, there were too many characters to follow. It was hard to care about anyone.”
Anita Singh, The Telegraph

“If you were a fan of the original series, perhaps the return of Van Der Valk is an exciting prospect. But to new viewers, the introduction of a troubled detective is tedious, especially when so little time is given to developing his character. Every single character of note had an English accent, a homage to the original series, but since the boom of Scandi-noir, there really is no excuse not to have more native accents dotted around Amsterdam.”
Emily Baker, The i

“Of all the crime serials to reinvent for the 21st century, Van Der Valk must be the most unlikely. Gin-swilling, herring-munching, foul-tempered, self-pitying, the character was so unlikeable that even his creator — writer Nicholas Freeling — lost patience and shot him dead halfway through a novel.”
Christopher Stevens, Daily Mail