“This drama continues to have a slight air of BBC Education finger-wagging about it, but there’s no doubting its power at showcasing the overt and subtle signifiers of racial injustice” 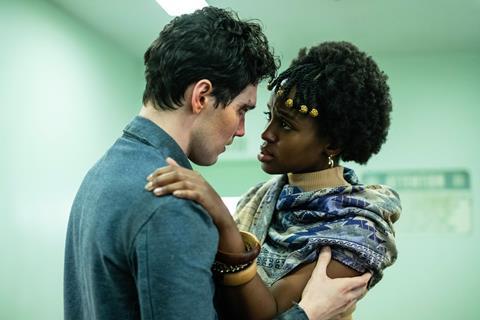 “This drama continues to have a slight air of BBC Education finger-wagging about it, but there’s no doubting its power at showcasing the overt and subtle signifiers of racial injustice, down to the posters that adorn the cityscapes and the fact that all the best clothes have an African look, with poorer ‘Nought’ kids trying to mimic it. Our two young leads are engaging enough, even if the material is essentially YA/teen drama stuff. That’s less of a criticism than it sounds, because what matters here is the world it has created and the ideas it generates about power dynamics and human nature. All of it is horribly convincing.”
Ben Dowell, The Times

“Visually, there’s a treat in store as the Empress of Aprica makes a state visit and all the Crosses get their glad rags on to meet her. But the plotting gets dafter and clunkier, and the dialogue is as wooden as the Aprican sculpture in the prime minister’s home. Still, my son was tugged along by the adrenalin of all the guns and the car chases. And for all its clunkiness, the show has opened up good, thoughtful family conversations about the nature of privilege, race, politics and the media.”
Helen Brown, The Telegraph

“A programme that wants to be a chilling fable, a talking point, a shaming call to action, but is, sadly, none of those things, because it’s too confused in its intentions and too poorly executed. It airs late and features too much swearing, violence and politics for a young audience, while perhaps not being brutal enough for an adult saga with such a strong premise. Where it really goes wrong, though, is in the way its main characters talk: the open-hearted naivety of the books’ narrators has been replaced by a terribly stilted argot, where every line has a pained intensity that clunks against the actors’ clenched teeth.”
Jack Seale, The Guardian

“Paterson Joseph is an accomplished actor and he does his best with this tosh, but it’s hopeless. All he can do is bark orders to his machinegun-toting henchmen. Noughts + Crosses does feature wonderful costumes, but that’s about all you can say for it.”
Christopher Stevens, Daily Mail

“Though Noughts + Crosses couldn’t be accused of subtlety, its portrait of a nightmarish alternative universe suffused in racism held up a distorted mirror to our own world – and invited us to reflect on what we saw staring back.”
Ed Power, The i

“On first viewing, it fits neatly into that genre of Merchant-Ivory movies, coming-of-age stories peopled with irascible doctors, irritating big brothers and housemaids with provincial accents. Then you look again and see something far darker under the surface. Everything about Life After Life is as richly layered as a poem, with new meanings revealed as the story is peeled away.”
Christopher Stevens, Daily Mail